The number of pay TV subs in North America [Canada and the US] will fall from 112 million in the peak year of 2012 to 106 million in 2021, according to the fifth edition of the Digital TV North America Forecasts report.

Simon Murray, Principal Analyst at Digital TV Research, said: “At first glance, this does not indicate a massive cord-cutting problem. However, the number of non-pay TV homes will climb from 20.7 million to 33.3 million over the same period [as the number of households will continue to increase]. To put it another way, pay TV penetration will drop from 87.1% in 2012 to 80.3% in 2021.” 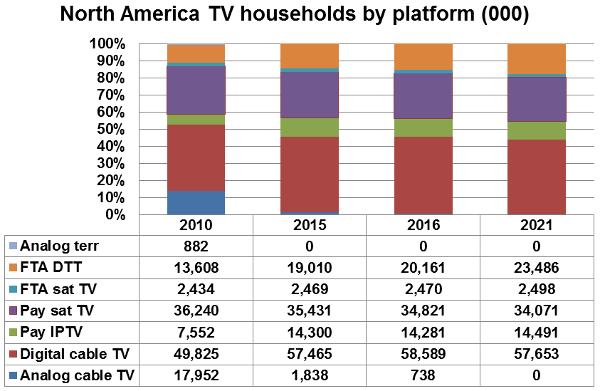 Murray added: “2015 was notable because subscriber losses were recorded for all of the major platforms: cable, satellite and IPTV. Cable has been losing subscribers since 2011. Satellite TV started in 2014, and IPTV joined them in 2015.”

Much of the IPTV loss is attributable to AT&T encouraging its U-Verse subscribers to switch its DirecTV satellite platform. However, not even this bonus was enough to stem the loss of satellite TV subscribers.

Despite these gloomy facts, fewer than 2 million pay TV subscribers will be lost between 2016 and 2021.