CATCHPLAY On Demand launches in Taiwan

TAIPEI — Taiwan’s leading independent film distributor and digital content aggregator launches the CATCHPLAY On Demand service today, with a special focus on movies. It is also announcing its partners in two additional Asia-Pacific markets – StarHub Singapore and Telkom Indonesia – which will have associate services launching in the second quarter of 2016. 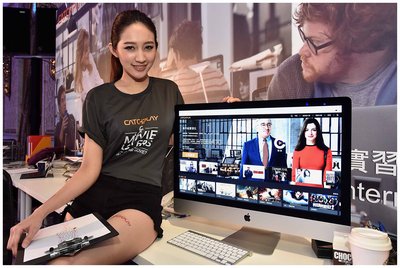 CATCHPLAY On Demand features not only movies from NBC Universal, Warner Brothers, Walt Disney and various independent studios in Hollywood, but also Asian and Chinese-language films. Compared to other services, Taiwan audiences will enjoy a greater diversity of content and a higher ratio of new releases. Mr. Timothy Chen, Chairman of CATCHPLAY, says, “We are focusing on both the quality of the content and the quality of the viewing experience”

While wholly developed in Taiwan, CATCHPLAY On Demand has already attracted recognition in the region. Ms. Daphne Yang, Chief Executive Officer of CATCHPLAY, says, “We understand that there are no geographical borders when establishing an Internet service platform. Furthermore, without the support of a large consumer base, we would not be able to invest the resources that are necessary to create a world-class service. Therefore, for the past 18 months, we have been meeting with major media players in the region’s key markets while developing the Service platform. Today we proudly announce our first two partners.”

Telkom Indonesia is the leading telecom group in Indonesia with over 150 million subscribers, with its number of IPTV and fiber broadband users growing rapidly at a rate of 2 million per year. Mr. Joddy Hernady, who heads content business of Telkom Indonesia says, “Compared to other OTT content providers, we like the CATCHPLAY On Demand content offering and user experience very much. We will officially provide the service in the second quarter of this year to our IPTV, fiber broadband, and mobile subscribers.”

According to Ericsson ConsumerLab TV & Media Report 2015, more than half of Taiwan consumers watch digital streaming content daily, averaging 7.8 hours each week. Although this is 13% higher than the current global average, which has doubled to 6.0 hours since 2011, it reflects the broader worldwide trend in digital media consumption. With today’s announcements, CATCHPLAY maintains its position at at the vanguard of this major shift in consumer trends in the Asia-Pacific region.