Netflix expected to withdraw from Russia

Netflix and Amazon Prime Video will boost the Eastern European SVOD sector considerably. The Eastern Europe OTT TV & Video Forecasts report estimates that Netflix will have 3.43 million subscribers by 2022, nearly triple its 2016 result. Amazon Prime Video’s achievements will be less impressive, but will still have 1.12 million subscribers by 2022.

Simon Murray, Principal Analyst at Digital TV Research, said: “These numbers may seem modest, but they will be accomplished without any subscribers in Russia. The Russian regulator has recently introduced a 20% foreign ownership equity limit on OTT platforms [with more than 100,000 subscribers]. We believe that this will force Netflix and Amazon Prime Video to abandon their standalone platforms. This is a major blow to their global ambitions. 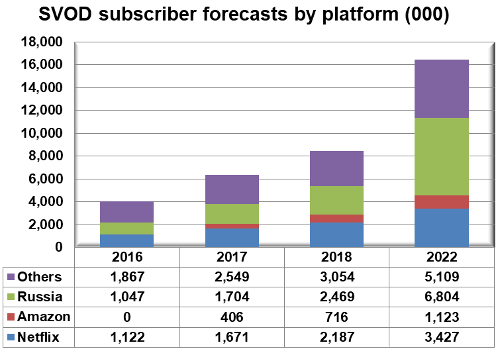 “Instead, they are likely to license their original content to a local platform. Amediateka already brands itself “home of HBO”, so deals with other platforms are possible. Netflix has already done something similar in China with IQiyi.”

OTT TV episode and movie revenues for 22 Eastern European countries will reach $2.23 billion in 2022; quadruple the $552 million recorded in 2016. Russia will account for 46% of the region’s OTT revenues by 2022, with Poland generating a further 19%.