Western European pay TV will gain subscribers between 2017 and 2023. Although this only represents a 2.6% increase, the Western Europe Pay TV Forecasts report estimates nearly 3 million more subs to take the total to 106 million.

Simon Murray, Principal Analyst at Digital TV Research, said: “Much of the pay TV subscriber growth will come from countries with traditionally low pay TV penetration. More than half of the region’s next additions will come from Italy [up by 960,000 between 2017 and 2023] and Spain [up by 716,000]. Germany will add 913,000 subscribers.” 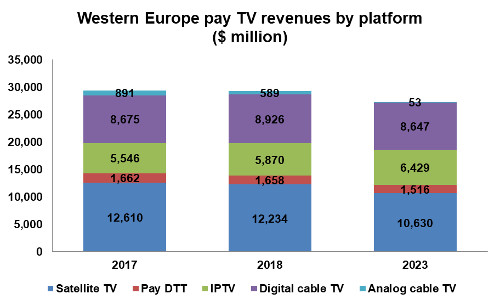 Murray continued: “However, subscriber numbers will fall for six of the 18 countries covered in the report. The UK will be the worst affected, although it will only lose 234,000 subs between 2017 and 2023.”

IPTV is gaining share at the expense of the other pay TV platforms; having overtaken satellite TV in 2015. IPTV will add 8 million subscribers between 2017 and 2023 but pay satellite TV will lose more than 2 million.

Revenues will fall in all but three of the 18 countries covered in the report. The UK will lose $628 million over this period, although it will remain the most lucrative pay TV market by 2023. Regardless of having the most pay TV subs by some distance, Germany’s pay TV revenues will remain a lot lower than the UK – at $3.61 million by 2023. Italy will overtake Germany in 2023.

Western Europe’s top three operators will account for 39% of the region’s pay TV subscribers by 2023. The same companies will take 50% of pay TV revenues.

Sky will remain the pay TV revenue leader by some distance, with $8.49 billion from its satellite TV operations in 2023. Liberty Global will contribute a further $3.91 billion and Vodafone $1.21 billion.