MONTEREY, Calif. — The increasing popularity of virtual multichannel services along with the staying power of traditional, big-subscription packages are still expected to account for more than 70% of households through 2022, according to the latest forecast from Kagan, a media research group within S&P Global Market Intelligence. However, cord cutting is projected to reduce the overall number of households with a subscription to live linear channels in the near-term outlook. 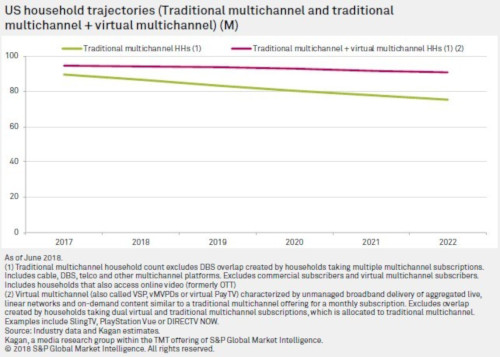 Consumer appetites for traditional multichannel packages are waning, driving expectations for a contraction in the number of households in the U.S. with a classic cable, telco or satellite video offering. While skinny bundles from so-called virtual multichannel platforms are tapping into the demand to downsize the traditional “cable” bill, growth in self-aggregating, online-only households, as well as homes that rely on antennas for over-the-air (OTA) reception, are expected to pressure take rates.

To access to the full report, please reach out to [email protected]