Roku stretches lead as #1 streaming TV platform in US

NEWTON, Mass. — Roku’s streaming TV platform accounted for more than 30% of US sales of connected TV devices in Q1 2019, further increasing its lead in streaming TV platforms according to the latest research from Strategy Analytics. The report, USA Connected TV Device Vendor Market Share Q1 2019, finds that there are now more than 41 million Roku-based devices in use, including Roku media streamers and Roku-based smart TVs, accounting for 15.2% of all media streaming devices. Roku now has a 36% lead over the next major platform, Sony PlayStation, in terms of devices in use. The report predicts that this lead will stretch to 70% by the end of the year, largely as a result of the success of Roku’s smart TV partner strategy. 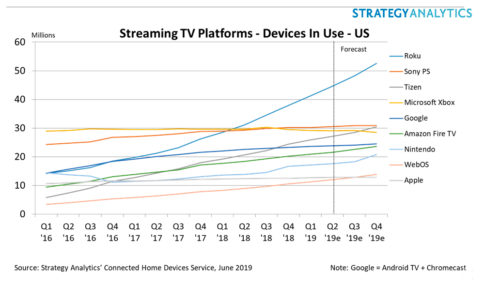 David Watkins, Director at Strategy Analytics and the report’s author commented, “Roku had another strong quarter in Q1 and continues to hold a commanding lead in streaming media platforms in spite of Amazon’s growing influence in the living room. Roku’s extensive content offering, comprehensive search function and simple and intuitive user interface have been key factors in its success, alongside affordable hardware and regularly updated software. Roku has managed to establish itself as a highly respected and trusted brand in the US with no perceived hidden agenda when it comes to promoting content on its platform. However, the company is much less well-known outside of the US and in order to succeed on the international stage it will need to face down the twin challenge of building brand awareness and drawing users away from well-established players such as Amazon, Apple and Google.”

“There was record growth in the smart TV market in the first quarter of 2019 and Roku and TCL have proved to be a great partnership in this rapidly growing segment.” added David Mercer, Principal Analyst at Strategy Analytics . “Roku is set to become the US’s top smart TV platform this year in terms of sales share, and Google and Amazon clearly have their work cut out to stay in touch with the market leader.”