FTTH/B now passes more than half of homes in EU39 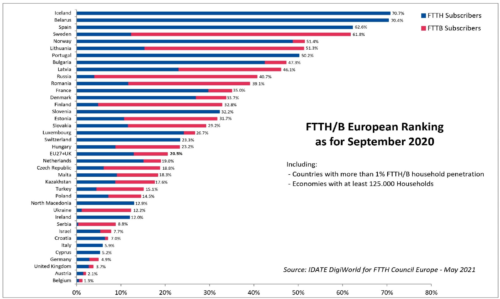 The number of FTTH and FTTB subscribers in Europe increased by 16.6% in EU39 in the year since September 2019 with 81.9 million FTTH/B subscribers in September 2020. Russia still plays a major role in this increase, however, it is interesting to note that the EU27+UK experienced a 20.4% increase on its own.

Fibre technologies have been continuously evolving during the last few years with a predominance of FTTH architecture over FTTB (63% vs 37%). Alternative Internet Service Providers are still constituting the largest part of FTTH/B players, with a contribution of around 57% of the total fibre expansion. It is interesting to note that many countries where legacy infrastructure still dominates have modified their strategy deploying more FTTH solutions, migrating from existing copper based and cable-based networks towards fibre and are even intensifying copper switch-off. Nevertheless, three historically copper-strong countries (UK, Germany and Italy) are accounting for almost 60% of homes left to be passed with fibre in the EU27+UK region. The ongoing COVID-19 pandemic, in turn, has demonstrated the necessity of both FTTH deployments and adoption. The governments and local authorities are increasingly involved in the digital transformation, introducing revised national programmes, subsidies and relevant policy framework to promote fibre expansion.

“The telecoms sector can play a critical role in Europe’s ability to meet its sustainability commitments by reshaping how Europeans work, live and do business. As the most sustainable telecommunication infrastructure technology, full fibre is a prerequisite to achieve the European Green Deal and make the European Union’s economy more sustainable. Competitive investments in this technology should, therefore, remain a high political priority and we look forward to working with the EU institutions, national governments and NRAs towards removing barriers in a way to full-fibre Europe” said Vincent Garnier, Director General of the FTTH Council Europe.

Iceland tops the European FTTH/B penetration ranking for the second consecutive year with a 70,7% penetration[6] rate.

Iceland remains a leader in FTTH/B penetration, championing the ranking followed closely by Belarus (70,4%). Spain (62.6%) reclaims the third position from Sweden (61.8%) and assumes the last spot on the podium of fibre leaders.

This year, four countries have entered the FTTH/B penetration ranking (as opposed to no entries in last year’s report), namely Belgium, Israel, Malta and Cyprus.

“The data of this new edition of our Market Panorama confirms that fibre roll-outs are taking place at an increasingly faster pace in Europe, and the EU is making a very significant – though uneven – progress in meeting its connectivity targets. This year’s report demonstrates that 3 European economies that have recently intensified their fibre rollout – Germany, Italy, and the UK – still account for almost 60% of the entire remaining homes to be passed in the EU27+UK region” commented Eric Festraets, President of the FTTH Council Europe. “This further demonstrates that the implementation of the new European Electronic Communications Code and in particular of its Very High Capacity Networks provision will be essential to meet the ambitions of “Europe’s Digital Decade” and a greater digital empowerment by 2030.”