The subscription video on demand (SVOD) service revenue in India is expected to grow at a robust compounded annual growth rate (CAGR) of 15.9% from US$0.9bn in 2020 to US$1.9bn in 2025 in line with increasing demand for various over-the-top (OTT) video service platforms in the country, according to GlobalData, a leading data and analytics company. 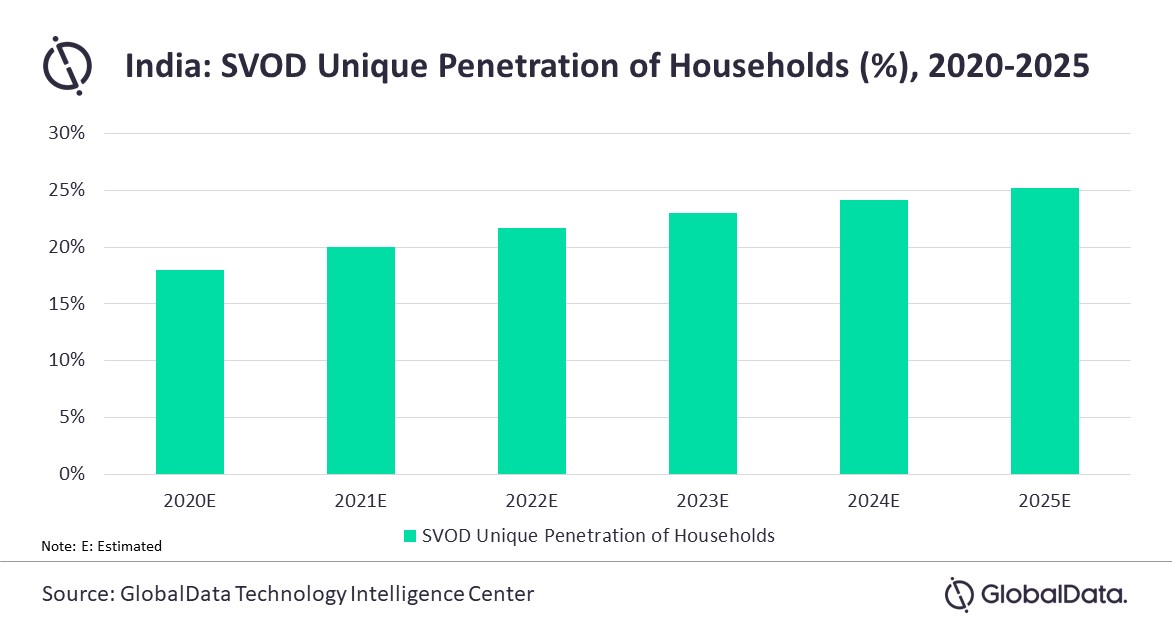 GlobalData’s India Subscription Video on Demand (SVOD) Forecast reveals that the SVOD subscriptions in the country skyrocketed in 2020 witnessing 88.1% Y-O-Y growth. This was mainly due to the COVID-19 restrictions implemented during the year, including closure of schools and colleges, work-from-home scenario, and most importantly the ‘complete shutdown’ of multiplexes and cinema houses, prompting people confined to their homes to increasingly adopt digital entertainment services.

SVOD subscriptions and household penetration will continue to grow over the forecast period, driven by the rising fixed and mobile broadband penetration in the country thanks to affordable 4G mobile and fiber plans. Reliance Jio, for instance, offers competitively priced 4G and fiber plans packaged with SVOD platforms such as JioTV and JioMovies. JioFiber’s most popular plan with unlimited data at 150 Mbps costs INR999 (US$13.46)/month and packaged with popular SVoD platforms like Disney+ Hotstar, Amazon Prime Video, SonyLIV, Zee 5, Voot Select, ALTBalaji and Eros Now.

Pradeepthi Kantipudi, Telecom Analyst at GlobalData, says: “India is a very attractive market for the OTT players considering its young population, growing smartphone users, and highest data usage. Global giants such as Disney and Netflix have already started investing in India with Disney acquiring local OTT player Hotstar in 2019 and Netflix spending heavily on the production of local content in various Indian languages.

Disney+Hotstar holds the largest share in the Indian SVOD market, by subscriptions. The company benefits from its coverage rights to the Indian Premier League (IPL), one of the biggest sporting events in the country, and multiple films under its Multiplex sub-brand. Disney+Hotstar has also collaborated with telecom operators such as Reliance Jio and Airtel starting September 2020 to offer recharge plans bundled with new Disney+ Hotstar mobile annual subscription.

Ms. Pradeepthi concludes: “The COVID-19 pandemic has proved to be blessing in disguise for the Indian SVOD services market. With many local and global players coming in, the market has become very competitive. Right product placement comprising of great mix of regional and global content at a competitive pricing will be the key factor to succeed in the market like India.”