Despite an unchallenged domination in terms of pay TV revenues, the Comcast group, which operates Sky and Now TV brands in the UK, Ireland, DACH markets and Italy, is moving its strategy away from satellite TV. The US based media group has launched standalone OTT pay TV products in each of its operating markets, slowly migrating its historic subscriber base towards those more flexible plans. Focusing on premium offers, Sky is enriching its content libraries by aggregating leading streaming platforms in its packages and struck significant deals in Western Europe. In the UK, Discovery+ and Disney+ entered the market through distribution partnerships with Sky. This month, Comcast also announced the launch of its own smart TV product line, an important move that reflects one of the company’s new direction away from traditional set-top boxes and digital broadcast. 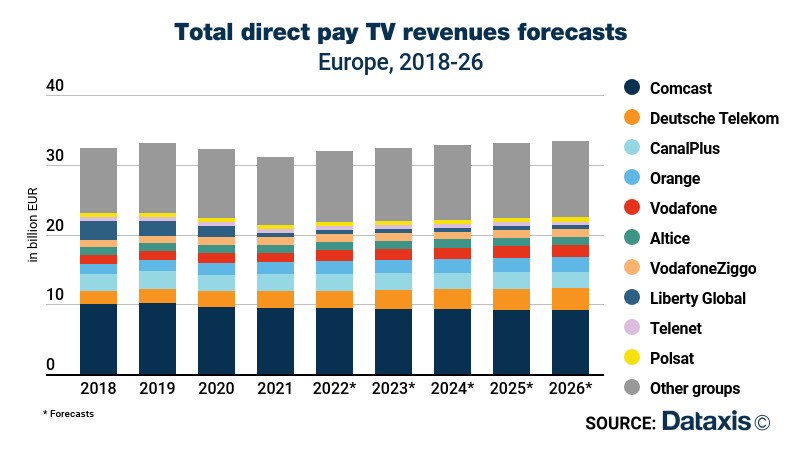 Second only to Comcast, Deutsche Telekom, Germany’s incumbent operator, is generating a growing share of pay TV revenues in Europe. If more than half of the group’s revenues are generated in its home country, Deutsche Telekom is also present under its T-Mobile and Telekom brands across Europe in Czech Republic, Hungary, Poland, Slovakia, the Netherlands, North Macedonia and as Magenta in Austria. Local entities have also started acquiring smaller competitors to further widen their reach. Dataxis estimates that Deutsche Telekom’s pay TV revenues will increase by more than 25% in the upcoming 5 years, which is 3.6 times faster than the total segment, thanks to its focus on IP based TV offers and its increasing presence in markets where pay TV retain significant progression margins.

French telecom operators also hold a strong position on the European TV landscape. Premium satellite operator Canal+ generated 2.4 billion euros in direct pay TV subscriptions across 12 European markets in 2020. Through the acquisition of M7’s satellite TV operations in September 2019, the group expanded its reach outside of France and Poland to an additional 2.4 million TV subscribers across Belgium, the Netherlands, Austria, Germany, Czechia, Slovakia, Hungary and Romania. Orange is also a strong pan-European competitor, present in 8 markets: France, Belgium, Luxembourg, Spain, Poland, Romania, Slovakia and Moldova. Meanwhile, Iliad, the parent company of French telco Free, is expanding outside its home market: after acquiring Polish mobile operator Play in 2020, the group has announced its intentions of buying cable operator UPC in Poland from Liberty Global. The transaction is awaiting regulatory approval and should be completed by mid- 2022.

Among significant actors opting out of the market, Liberty Global, which generated 8% of total European direct pay TV revenues in 2018, will only cover a 2% market share this year. This follows the holding’s sale of its cable operations under the UPC brand accross Germany, Hungary, Romania and Czech Republic to Vodafone group at mid-2019. The holding still operates UPC in Switzerland and Slovakia and co-controls the Virgin Media O2 JV with Spanish group Telefonica since 2021 in the UK. After having transferred its assets in cable networks, the group may be preparing a return in its former markets, starting with Germany where it announced teaming up with InfraVia Capital Partners to invest in building their own fiber networks. 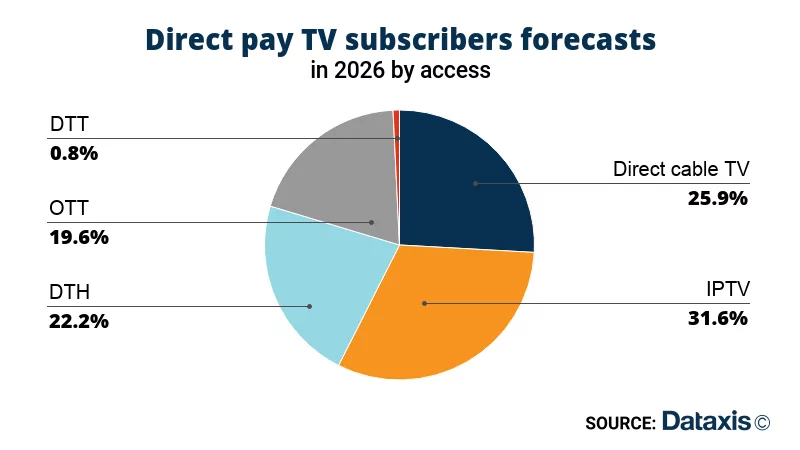 Traditional pay TV operators are increasingly pushed either into diversifying their accesses or giving in to consolidation with their historic competitors. In southern European markets for example, local groups have intensified their acquisition strategies, like MTS Srbija which acquired a multitude of small local cable operators into its brand Supernova, boosting its market share from one quarter in 2018 to almost half of Serbian total pay TV connections, taking over the leading position before Serbia Broadband. In Slovenia, small cable operators whose survival was challenged are selling their operations to leading telcos like Telemach, T2 and A1.

Overall, the pay TV market is expected to slowly recover from the blow it suffered during the pandemic. Pay TV revenues in Europe should reach 33 billion euros by 2025, eventually topping its 2019 level. The growing availability of cheaper and more flexible OTT pay TV plans is pushing historic operators into adopting new strategies. Virtually all significant TV operators have launched standalone OTT packages to meet the market demands and are slowly migrating their subscriber base towards network agnostic TV plans. IP based TV receptions will lead to new subscriptions and are estimated to represent more than half of all total pay TV accesses by 2026. By then, OTT pay TV alone will represent 1 out of 5 TV subscriptions.