Despite a boost since the pandemic, the European AVOD market is still fledging

Over the last three years, the number of AVOD (advertising video on demand) users has significantly increased in Europe. If the lockdown context between Q1 2020 and Q2 2020 assuredly had a massive impact in terms of traffic – with growth rates twice as high as the previous trends – it remained limited, as growth rates eventually retrieved their past value at the end of 2020. Overall, there has been a noticeable growth acceleration in terms of global traffic since 2018 in the continent. While the European market used to grow at a 10% rate year-on-year on average, the last three years have seen growth rates between 16% and 20% overall. This growth is even more significant considering the fact that Youtube remains the dominant player, mechanically dragging the growth down as the AVOD service reached its mature state in most European countries several years ago. 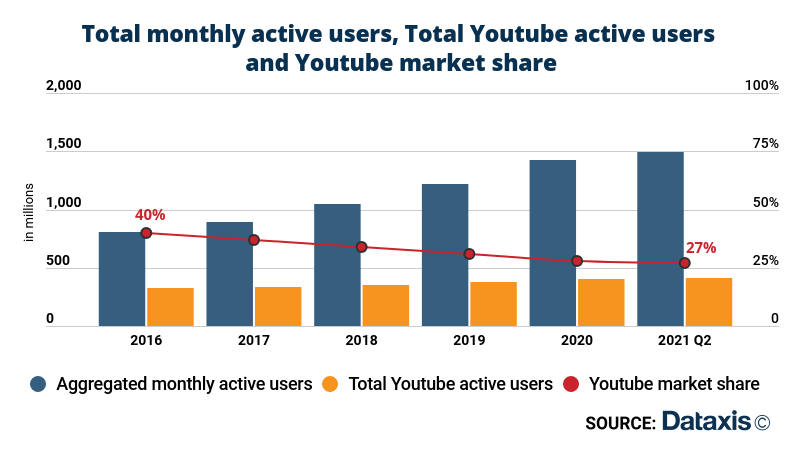 On the competition side, while the number of active European AVOD services used to grow at a slow pace prior to 2019, the market expanded significantly in 2020 with the launch of 15 new services, and this evolution was also confirmed in the first semester of 2021. These trends can be explained by two main factors. First, a growing number of US services have started to enter the European market, to diversify their revenue stream while they were becoming more mature in their domestic market: Pluto TV, Discovery Plus, Tubi or Facebook Watch and many others are now widely available in Europe and account for a growing share of the AVOD space. Secondly, the content offer and its curation have expanded tremendously both with the launch of new European actors like Watch4, Rakuten TV Free, Filmstream or Joyn, and with the increasing amount of aggregated content available by platform, providing alternatives to traditional BVOD offers, which have captured the major share of traffic and revenues after Youtube. 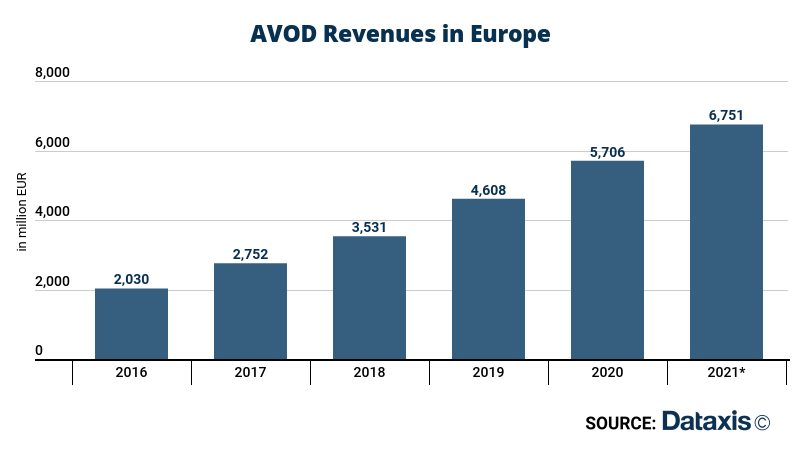 However, the European AVOD market remains nascent and some warning signs need to be considered. If AVOD revenues are still increasing faster than the total monthly active users, driving up the ARPUs, the year-on-year growth has been decreasing steadily since 2017: from 35% in 2017 to 23% in 2020 – which is far from being negligible in the COVID-19 context. As mentioned above, a significant share of these revenues is still captured by Youtube and BVOD services across Europe, while smaller European pure players struggle to monetize their audience. Consequently, ARPUs remain low in the continent: as of Q1 and Q2 2021, only 15 players out of the more than 125 AVOD services available succeeded in generating ARPUs higher than €1 from their audience.

In the end, if usage has surged since the beginning of the pandemic, the AVOD market still needs to secure higher revenues to become sustainable. This issue is more decisive for pure players than for BVOD services. The latter have been amortizing their linear content through traditional TV channels, as a part of their long-tail strategy. But for the former, acquiring content remains a major entry barrier, as well as traffic costs which have mechanically increased since Q1 2020, with the growth in audiences. Several services have then tried whether to diversify their advertising revenue streams, or to give more space to advertisers within their service. For instance, Peacock has started to offer category exclusivity and the ability to test new ad formats to a range of US advertisers since its launch. This “first-mover advantage”, according to Laura Molen, President of Advertising Sales and Partnerships at NBCU, allows these selected brands to be involved to some extent at a strategic level. One of the keys could also be the increasing hybridization of business models between AVOD and SVOD, with the multiplication of two-tiers offers combining cheaper ad-supported subscription plans and traditional SVOD offers – Hulu, Discovery Plus and Peacock being the most emblematic ones.

Dataxis will soon significantly improve its coverage on the AVOD market incorporating estimations of Monthly Active Users (MAU) for every single AVOD platform in Europe, North and Latin America. The users and revenues metrics will then be updated on a quarterly basis.