If historically the Australian and New Zealander pay TV markets have mainly been counting DTH homes, things might significantly change in the next five years. Besides, like in other regions of the world, COVID-19 could have set the cat amongst the pigeons, when it comes to cord-cutting and OTT adoption. 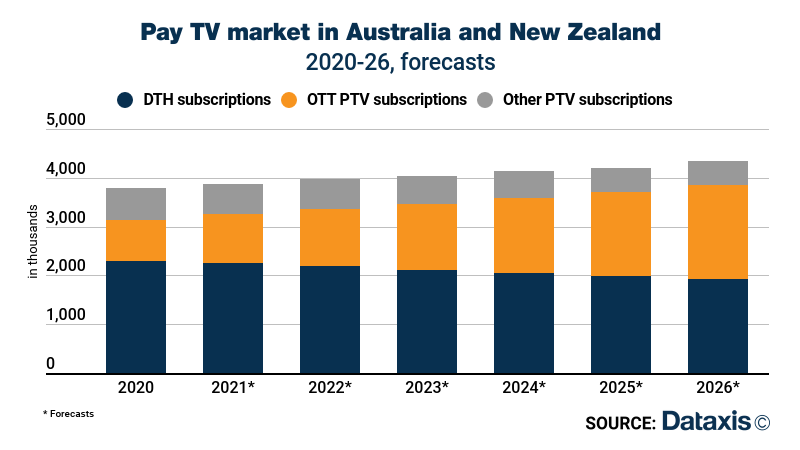 Despite being available for several years, OTT pay TV offers have struggled to gain traction in Australia and New Zealand in the past. For instance, Foxtel Now and Kayo Sports, respectively the SVOD and the sports OTT pay TV offers of Foxtel, the leading pay TV operator in Australia, only accounted for 10% each of Foxtel’s pay TV mix in 2019. Eighteen months later, Kayo Sports alone accounts for almost 30% of subscribers, while in the meantime DTH subscriptions, which accounted for two-thirds of the total, collapsed to 43% of the mix.

But can we expect this trend to last and accelerate in the coming years? The answer is complex. In terms of figures, OTT subscriptions are indeed expected to overtake DTH by 2026. But in terms of content providers, only a few OTT pay TV services offer skinny bundles or extensive pay TV bouquets in the two countries.

In this sense, Fetch TV, one of the early OTT players in Australia which started to provide an extensive TV offer, widely distributed among NBN providers and retailers, should have grown significantly over the last three years. But in reality, the OTT operator has struggled to win market shares, partially due to the high prices of its additional subscription packs. The OTT service finally diversified its app catalogue in order to become the broadest OTT library in the country. This aggregation strategy could prove successful for Fetch in the coming years, as Dataxis forecasts Fetch TV to account for 20% of the Australian OTT market by 2026.

In the end, DTH markets are expected to remain strong in Australia and New Zealand, respectively accounting for more than 40% and 66% of the total pay TV subscriptions in the two countries.

Dataxis will host a digital conference dedicated to pay TV and OTT markets in Australia and New Zealand on November 18th 2021.