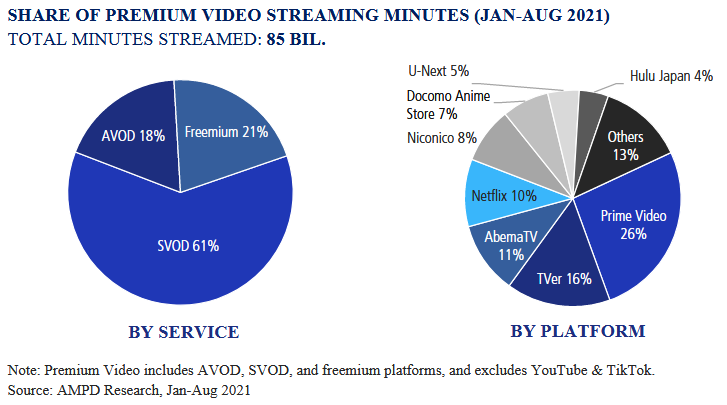 The report indicates that the SVOD paying subscribers topped 44 mil. in August 2021, with Prime Video (33%), Netflix (14%) and Hulu Japan (6%) in the lead. Commenting on the inaugural report’s findings, MPA Executive Director Vivek Couto said: “The premium video segment in Japan is increasingly competitive. Local content is critical, as illustrated by broadcast TV-consortium owned TVer’s growth over 2020-21, while Prime Video and Netflix’s licensed anime libraries have contributed over 40% of consumption on the platforms during 2021. More competition and category expansion is imminent as Disney+ expands with Star and local content in October 2021.”

About This Report & Methodology

The AMPD Vision® platform uses a permission-based panel of consumers who consent to the collection of their session-based activity. For this report, the platform passively measured real consumption on all android mobile devices in Japan between January to August 2021 with a sample size of 14,089 sourced from our in-market research partner Intage Group (ITG), Japan’s largest market research institute. The data is anonymized and conforms to data privacy legislation in Japan. Consumption estimates are based on MPA’s proprietary weighting and projection techniques to be nationally representative of mobile consumption for individuals aged 15 to 69 with adjustments made to estimate iOS consumption. MPA’s future reports will include passive data for iOS devices from 2022 bringing the total panel size to 19,000 individuals.