Younger adults now watch almost seven times less scheduled TV than those aged 65 and over, Ofcom has found, as the generation gap in media habits reaches a record high.

People aged 16-24 spend less than an hour (53 minutes) in front of broadcast TV in an average day – a fall of two-thirds in the last ten years.

In contrast, those aged 65 and over still spend around a third of their waking day enjoying broadcast TV, sitting down for almost six hours (5 hours and 50 minutes) daily. This is actually slightly higher than a decade ago.

Three streaming giants in a fifth of homes

Around a fifth of homes (5.2 million) subscribe to all three of the most popular platforms – Netflix, Amazon Prime Video and Disney+ – costing around £300 per year.

Nine in ten 18-24-year-old adults bypass TV channels and head straight to streaming, on-demand and social video services when looking for something to watch, with Netflix the most common destination. 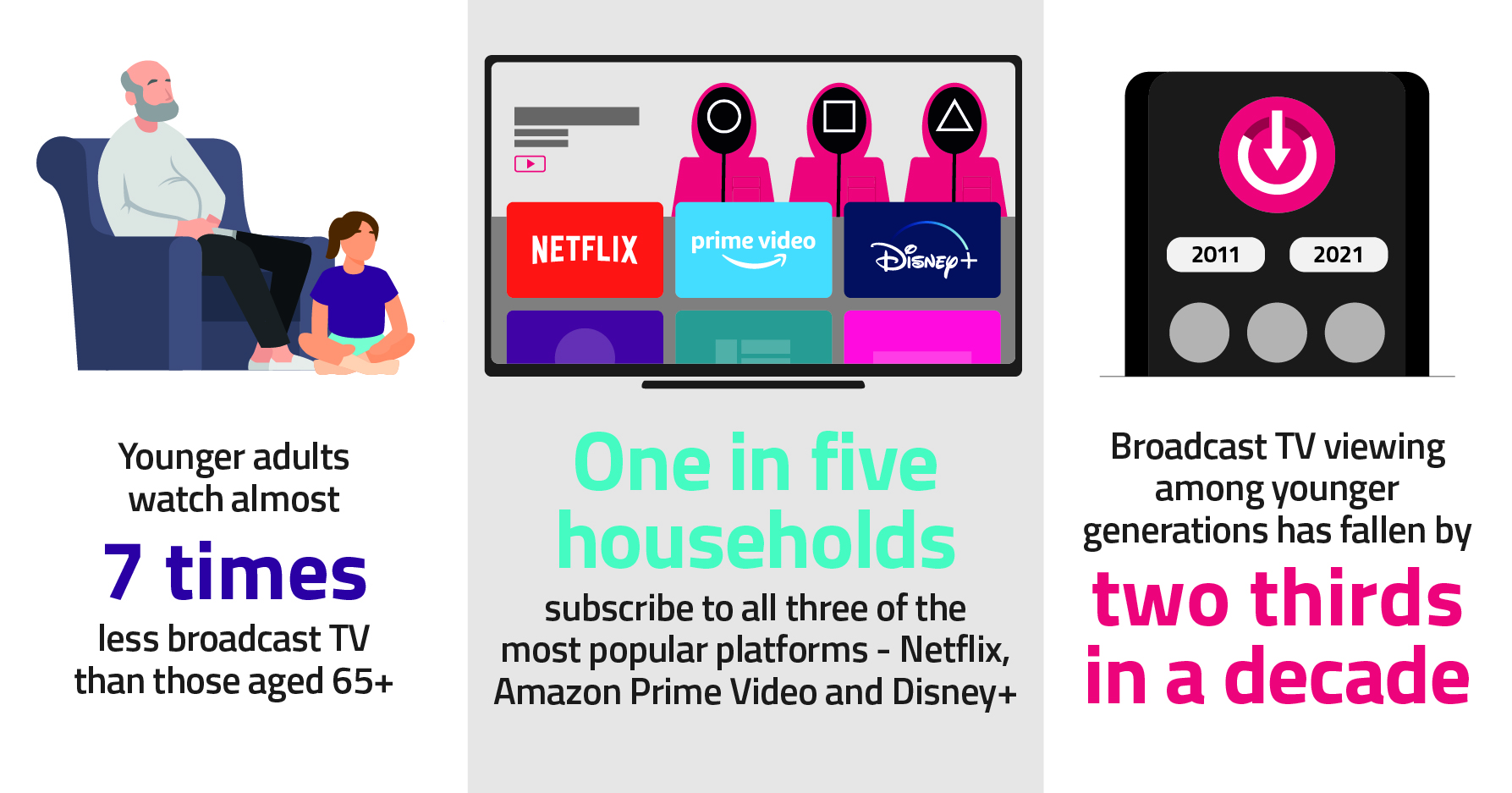 “The streaming revolution is stretching the TV generation gap, creating a stark divide in the viewing habits of younger and older people.

Traditional broadcasters face tough competition from online streaming platforms, which they’re partly meeting through the popularity of their own on-demand player apps, while broadcast television is still the place to go for big events that bring the nation together such as the Euro final or the jubilee celebrations.” – Ian Macrae, Ofcom’s Director of Market Intelligence

After years of strong growth, the number of homes using streaming services began to slow in 2021, before starting to decline in spring of this year.

As the rising cost of living puts pressure on household budgets, the number subscribing to at least one streaming service fell by more than 350,000, to 19.2 million.

However, cancellations do not necessarily represent customers that have been lost for good. Ofcom’s survey of subscribers who cancelled earlier this year found that almost three quarters (73%) of customers said they thought they would resubscribe – reflecting the flexibility that allows customers to pick up and drop subscriptions depending on changes in programmes, needs or circumstances.

Viewing figures of more than 10 million for the Women’s Euro 2022 final and the Queen’s Platinum Jubilee show that broadcast television is still a popular choice for momentous national events, but public service broadcasters continue to see both audiences and levels of viewing fall.

However, there is better news for their on-demand ‘player’ apps.

Overall, 82% of people said they used a PSB on-demand service in the past six months, roughly the same proportion who said they used at least one streaming service (83%). Six in ten (59%) viewers said they used these platforms to watch channels or programmes live at the time they are broadcast.

As a result, the average time spent watching services such as BBC iPlayer, ITV Hub and All 4 increased to 15 minutes per day, up by three minutes per person per day, bucking the trend of post-pandemic declines in viewing time.

And BBC iPlayer has a high level of satisfaction across all age groups, with over four in five (81%) of those who had used it recently saying they were satisfied with the service. 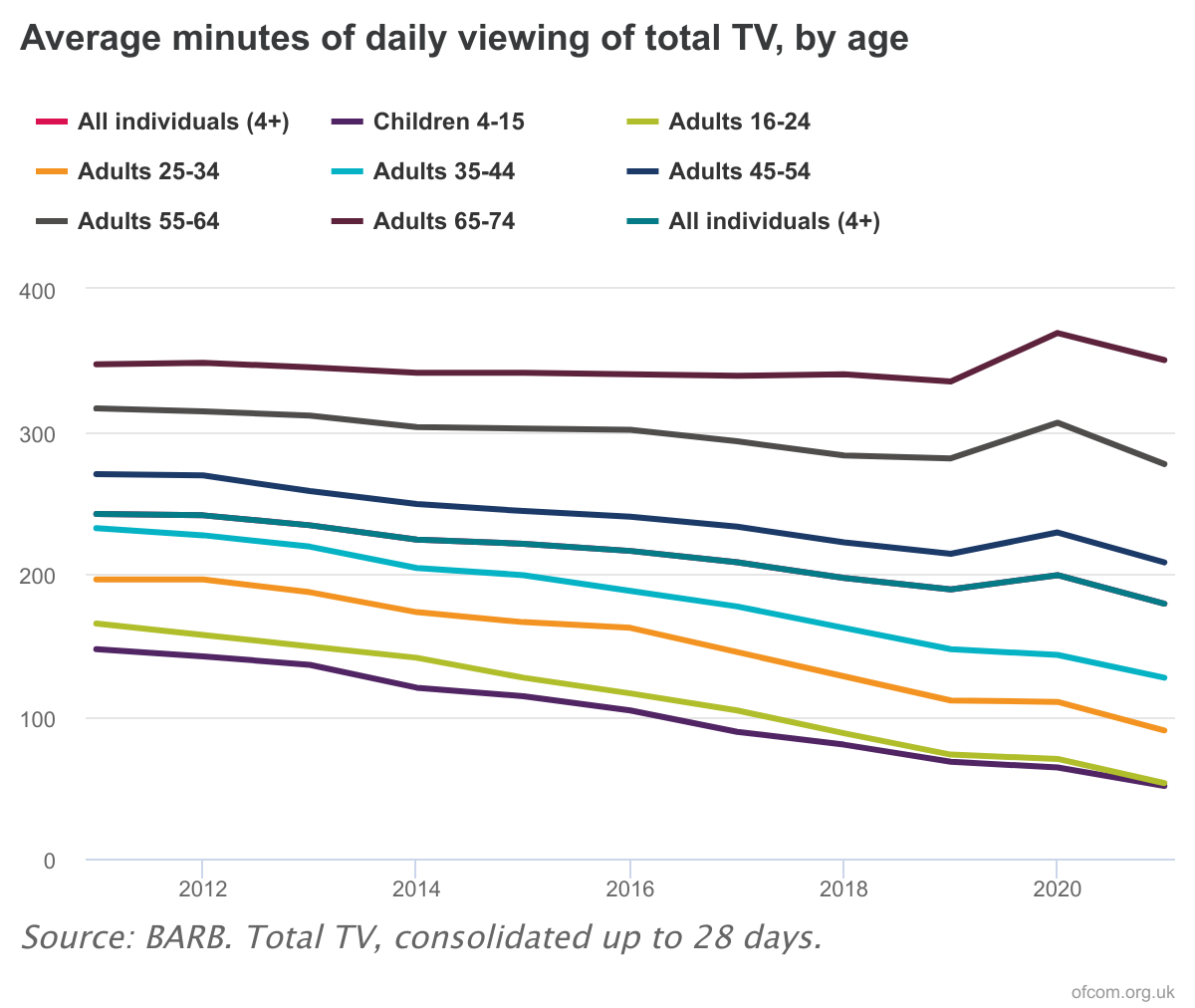