Sports Boost Broadcast Viewing in September, but Streaming Remains Top Format for Audiences, according to Nielsen’s Latest Report from The Gauge

NEW YORK — Nielsen’s latest report from The Gauge, the media measurement company’s monthly total TV and streaming snapshot, revealed that streaming remained the most-watched TV format in September, capturing 36.9% of overall television usage and marking another record-high share for the category. Broadcast also saw an increase in September with its share of TV climbing to 24.2%, while cable’s share dropped to 33.8%. Television usage as a whole was up 2.4% in September compared to August. 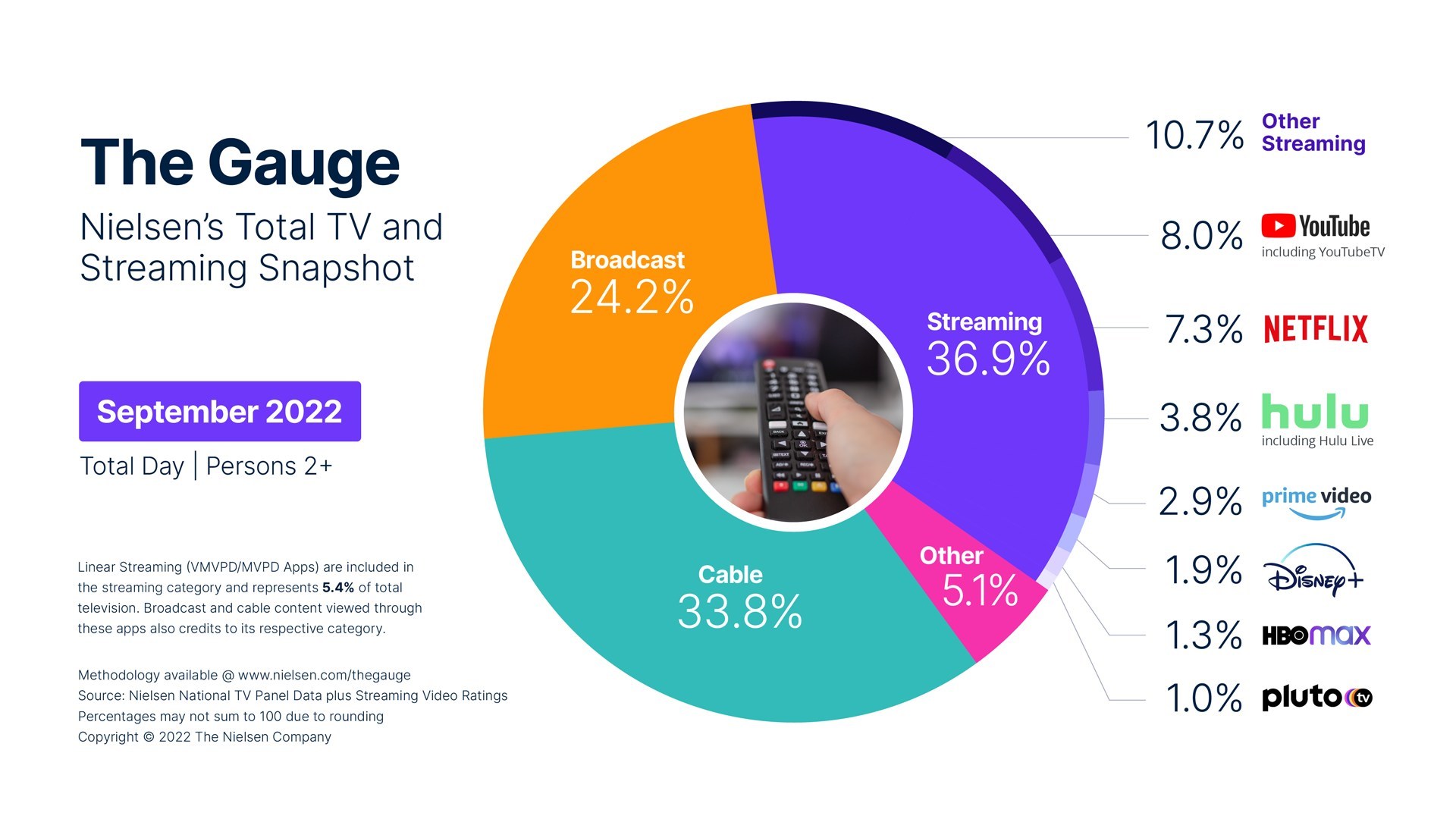 The broadcast category showed the largest month-over-month increase with a 12.4% bump in usage in September, which was driven by an impressive 222% uptick in sports viewing. This led to an additional 2.1 share points for broadcast this month compared to August, its largest share of television since May 2022 when it captured 24.4%. On a yearly basis, broadcast’s viewing volume was down 7.1% compared to one year ago, and the category lost 2.1 share points.

Despite a 40% increase in sports viewing, cable usage remained basically flat in September compared to August. However, due to the increases in broadcast and streaming, cable dropped by 0.7 share points to finish September at 33.8%, recording its lowest share to date as reported by The Gauge. Cable’s viewing volume declined -9.3% versus September 2021, and the category lost 3.8 share points on a yearly basis.

The streaming category added 2.0* share points in September versus August. On a yearly basis, streaming usage increased 34.6% compared to September 2021, and the category gained 9.2 share points.

Making its debut in The Gauge this month is Pluto TV, a free ad-supported streaming television (FAST) service. Pluto TV is the first FAST service to cross the 1% share threshold and break out of the “other streaming” category.

Several other platforms to make an impact in the streaming category this month:

The Gauge is Nielsen’s monthly snapshot of total TV and streaming usage in the U.S. It is underpinned by Nielsen’s TV ratings service, in addition to Streaming Platform Ratings which provides clients with audience measurement data that details the amount of time consumers spend streaming and on which platforms. This broad look at platform usage provides complimentary insights to Nielsen Streaming Content Ratings, which details viewing to subscription-based video on demand (SVOD) content at the title, program and episode level. By showcasing both the micro and macro-level data sets, the industry has a full picture of how this media is being consumed, as well as when and by whom.

* Note: The streaming category is being reported on a Live+7 viewing basis beginning with September 2022 data. It was previously reported on a live-only basis. This change tracks with the growth of linear streaming on MVPDs (such as cable provider apps) and vMVPDs (such as Youtube TV and Hulu Live), and the impact of time-shifted viewing on these platforms. In September, this change represented a shift of 1.0 share points from the “other” category to the “streaming” category, and to the services that include linear streaming.