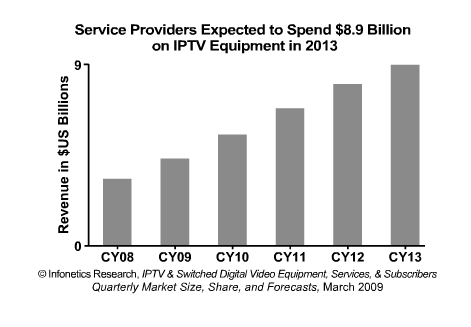 “With service providers around the world countering decreasing revenue by cutting capex, one would assume video equipment providers will be hit just as hard as their network equipment colleagues; however, that won’t be the case in 2009. Encoder providers like Harmonic, Tandberg (Ericsson), and Motorola will see a continued uptick in revenue this year as they benefit from the HD arms race currently going on in North America and soon to expand to Western Europe and parts of Asia,” said Jeff Heynen, Directing Analyst, Broadband and Video, Infonetics Research.