The latest quarterly Multiscreen Index report from informitv reveals the highest overall rise in the number of pay-television subscriptions around the world for two years, with most operators gaining subscribers. The 100 pay-television services in the informitv Multiscreen Index gained a total of 8.16 million subscribers in the last quarter of 2015, an increase of just over 2%.

The 10 services with the greatest gains added a total of 5.11 million television subscribers in the last quarter and 11.05 million over the course of 2015.

17 of the 100 services in the Multiscreen Index reported net subscriber losses for the quarter, with a combined loss of 762,000 television customers. The largest loss was reported by AT&T U-verse, which shed 240,000 subscribers, as AT&T promoted its recent acquisition, the satellite provider DIRECTV. 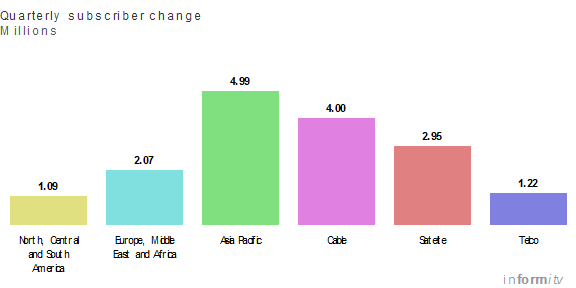 The greatest gains were in the Asia Pacific region, which added 4.99 million subscribers. Five operators in India accounted for just over 4 million of them.

There were 2.07 million more subscribers in the Europe, Middle East and Africa region. Sky added 337,000 subscribers in Europe, while Tricolor in Russia gained 200,000.

In North, Central and South America the number of subscribers rose by 1.09 million. Sky Mexico gained 230,000, while DIRECTV added 214,000 in the United States.

Cable operators added the most subscribers, up by 4.00 million, followed by satellite with 2.95 million and telco providers up by 1.22 million.

“Despite some losses, our index of leading operators worldwide shows an overall subscriber increase at the close of 2015,” said Dr William Cooper, the editor of the informitv Multiscreen Index. “A quarterly rise of 2% shows there is still growth in pay-television, particularly in emerging markets.”

“25 of the services in the index each gained over 100,000 subscribers in three months,” added informitv analyst Dr Sue Farrell. “Between them they added 7.27 million television customers.”