Three Chinese companies will top the Asia Pacific SVOD rankings by subscribers in 2023. Not expected to ever operate as standalone platforms in China, Netflix and Amazon Prime Video will take fourth and fifth places respectively. 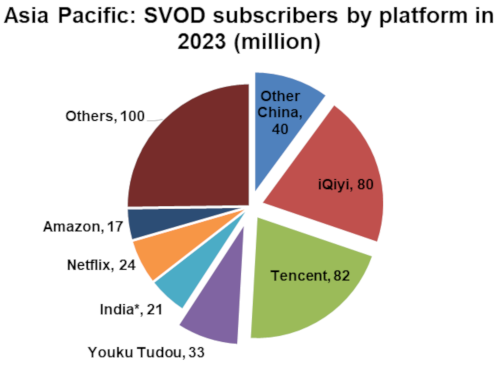 Simon Murray, Principal Analyst at Digital TV Research, said: “The Asia Pacific OTT TV & Video Forecasts report expects 351 million subscription video on-demand subscribers by 2023, up from 141 million in 2017. China will have 235 million SVOD subs in 2023 – or two-thirds of the 22 countries covered.”
Netflix ($3.12 billion) will top the SVOD revenues chart in 2023. The top three platforms will account for 54% of the region’s SVOD revenues by 2023. Asia Pacific SVOD revenues will triple from just under $5 billion in 2017 to $15 billion in 2023. China’s share will remain at about half of the total.

Murray continued: “Asia Pacific OTT revenues from TV episodes and movies will reach $42 billion in 2023; nearly triple the $15 billion recorded in 2017. The total will increase by $5 billion in 2018 alone.”