• What’s the news: T-Mobile introduced TVision™ Home, a newly upgraded version of Layer3 TV, in eight markets.
• Why it matters: T-Mobile has already been wildly successful disrupting the wireless industry. Today brings the Un-carrier one step closer to taking on Big Cable later this year.
• Who it’s for: The 74% of American households currently paying an average of $107.30 per month for cable or satellite home TV service who are tired of the hidden fees, bill creep and lousy customer service.

BELLEVUE, Washington — T-Mobile (NASDAQ: TMUS) today introduced TVision™ Home, a rebranded and upgraded version of Layer3 TV. TVision Home is launching in Chicago, Dallas-Fort Worth, Los Angeles, New York City, Philadelphia, San Francisco, and Washington DC metro areas, as well as Longmont CO, with other markets coming later this year. The Un-carrier is also launching Satellite Freedom and will pay off early contract termination fees for Dish and DirecTV customers, up to $500 via prepaid card, when they switch to TVision Home. T-Mobile also announced that Netflix and other streaming apps will be available on TVision Home, and the Un-carrier shared plans for TVision to run on popular third-party TV platforms in the future. 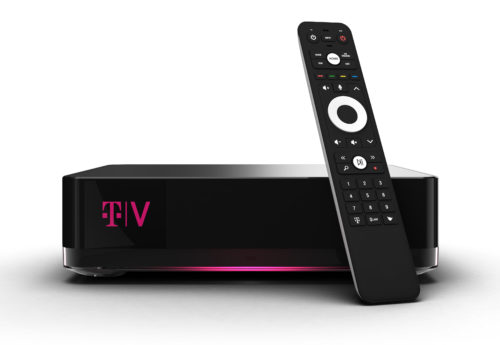 Following on its deal with Viacom last week, T-Mobile also announced they will launch nationwide streaming services later in 2019 as the Un-carrier brings its disruptive approach – listening to customers and solving their pain points – to cable & satellite TV (aka the Cableopoly).

“The Un-carrier has already changed wireless for good… and today’s news brings us one step closer to taking on Big Cable,” said John Legere, CEO of T-Mobile. “And with the New T-Mobile, we can do more than just offer home TV service … we can offer millions of Americans more choice and competition for TV AND home broadband. I can’t wait to begin un-cabling cable and giving millions the opportunity to cut the cord with Big Cable forever.”

TVision Home builds off the innovations in Layer3 TV and delivers an upgraded, premium TV experience for the 74% of American households still using traditional cable or satellite TV. TVision Home delivers what customers want most from high-end home TV with more HD premium channels available than anyone else, and the most 4K channels included at no additional cost. That’s 275+ available channels and over 35,000+ On Demand movies, shows and more, plus on-screen social content, a personalized home screen and DVR for each user, smart speaker voice control with Amazon Alexa or Google Assistant, and even access to your security cameras.

Because TVision Home is from T-Mobile, there are no hidden fees, no bill creep or exploding offers, no annual service contracts and no crappy customer service. BS-Free TV means:

Nearly half (48%) of pay TV customers are locked into a contract and face paying hundreds in early termination fees. With Satellite Freedom, T-Mobile is tackling the #1 reason customers stay shackled to TV providers they don’t like: early termination fees. The Un-carrier will pay off those fees, up to $500 via a prepaid card, for any Dish and DirecTV customers who make the switch, freeing millions locked into long-term contracts with steep cancellation fees. Goodbye fees, hello freedom.

TVision Home is part of T-Mobile’s 5G strategy and vision to give consumers real options to the cable companies, and that starts with the Sprint merger. Today, almost half of the country’s households (45%), and more than three quarters of rural households (76%) have no high-speed service (100 Mbps average) or only one option for high-speed broadband(3). But if the merger is approved, by bringing together T-Mobile and Sprint, the New T-Mobile will have the scale and capacity to create a supercharged 5G network capable of reaching over half the country’s households with high-speed broadband by 2024.

And while TVision Home uses your existing wired broadband today, TVision Home is IPTV designed for a 5G future where wireless broadband can replace your home internet. That means millions can finally free themselves from the Cableopoly once and for all.

“TVision Home is about so much more than home TV… it’s TV built for the 5G era,” said Mike Sievert, COO and President of T-Mobile. “With New T-Mobile, we’ll bring real choice, competition, better service, lower prices and faster speeds…right into your living room. And – speaking of speed – while the Cableopoly innovates at the pace of the cable companies, we’ll innovate at the pace of the internet to give customers more value and more freedom more quickly.”

TVision Home launches with a cable box today, but core to the Un-carrier’s TV strategy is that TVision works with the apps and hardware and services people already use. T-Mobile also unveiled plans to launch TVision on popular third-party TV platforms in the future. That means getting TVision will be as simple as downloading an app and picking from a variety of low-cost home or mobile subscriptions – no extra box or equipment required