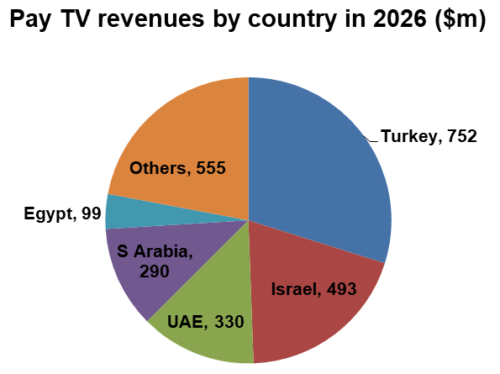 Simon Murray, Principal Analyst at Digital TV Research, said: “Five countries will contribute 78% of the region’s pay TV revenues in 2026. Turkey and Israel together will supply nearly half of the total. There are few winners. Eight of the 20 countries will lose revenues between 2020 and 2026.”

Israel is experiencing cord-cutting. It will lose 28% of its pay TV subs between 2020 to 2026. We forecast that Israel’s pay TV revenues will halve between 2016 and 2026. Beyond these figures, Israel’s OTT sector will grow significantly.

For the 13 Arabic-speaking countries, pay TV revenues will remain at about $1 billion despite subscriber numbers increasing by 18% to 4 million.