DETROIT, MI — A team of technologists came to Detroit last November to test a critical function needed to enable ATSC 3.0 spectrum use in automobiles and other mobile consumer functions. “Handoff technology” enables a mobile phone to continue carrying a call as it travels between the signals of two cell phone towers. The same technology is needed to use ATSC 3.0 data in a moving vehicle traveling between two or more broadcast towers. A version of DigiCAP’s DigiCaster, an ATSC 3.0 gateway, was installed at the two TV stations participating in the test. 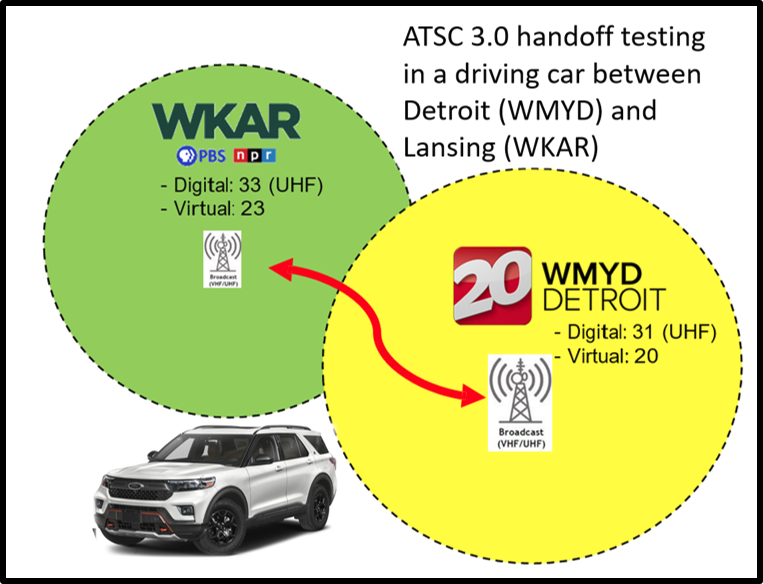 In the test car, LG Electronics installed a system to receive and display ATSC 3.0 signals on a rear-seat entertainment TV. As the car traveled from the signal coverage of one TV station to the next, the NRT handoff technology succeeded in keeping a steady TV signal on the receiver device.

“The success of the demonstration is meaningful as it shows that both entertainment and data services in moving cars can be commercialized” said Yeongho Je, Director of C&M Standard LAB at LG Electronics. The two ATSC 3.0 test signals were provided by WKAR TV, the Michigan State University public media station, and WMYD, The E.W. Scripps Company TV station in Detroit. Technical support and proof of concept project management was provided by Pearl TV. Heartland Video Systems installed and configured servers and installed the DigiCasters at both TV stations.

“Achieving seamless data hand off between the signals of adjacent ATSC 3.0 TV stations is foundational for any datacasting application in the automotive and mobile fields,” said Anne Schell, Managing Director at Pearl TV. “While data handoff technology is not new, confirming a successful test of this technology for use with ATSC 3.0 spectrum is an important step forward.”