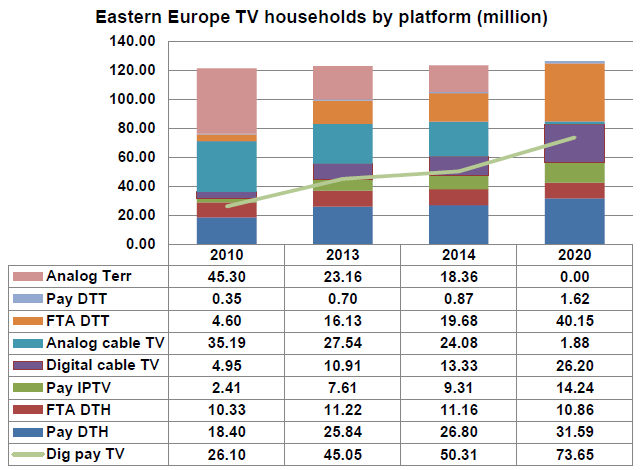 The Digital TV Eastern Europe report states that digital TV penetration crossed the halfway mark of TV households in 2012, up from a third at end-2010. Fast take-up will push digital TV penetration to two-thirds by end-2014 and onto 98.5% by 2020. Thirteen of the 21 countries covered in this report will be completely digital by 2020, with Estonia the first to full conversion – in 2012.

Simon Murray, author of the report, clarified: “For the purposes of this report, we have assumed that the situation in the Ukraine will be resolved quickly, with Russia withdrawing from the Crimea.”

From the 83.6 million digital TV homes to be added across the region between 2010 and 2020, Russia will contribute 40.7 million, with the Ukraine increasing by 13.3 million and Poland 6.7 million.

Russia will contribute $2.02 billion (28%) of the pay TV revenues in 2020 – overtaking Poland in 2015. Russia will be responsible for nearly half of the region’s $1.1 billion additional pay TV revenues between 2013 and 2020. TV ARPUs have traditionally been very low in Russia, but they are set to increase.