Evolution of TV streaming devices in Europe albeit slowly

According to Dataxis estimates Apple TV has more than 23 million active users globally, out of these approximately 7 million are in Europe. 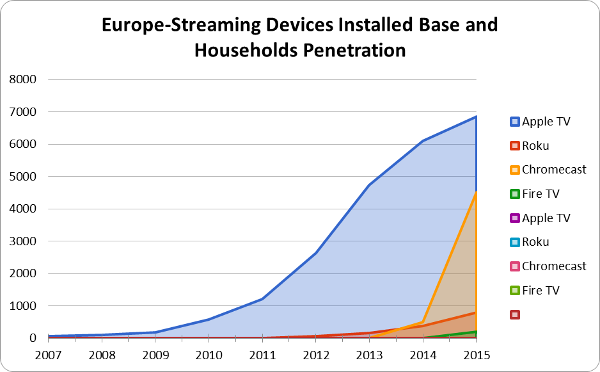 Roku is the most popular streaming platform in the US. Roku had 9 million active accounts worldwide by end of 2015 as per Dataxis estimates. In Europe Roku is only available in UK, Ireland and most recently France, with not that significant an installed base in Europe.

Google Chromecast although launched in 2014 in Europe has become the most popular streaming device after Apple TV. Dataxis estimates that at teh end of 2015 Chromecast had an installed base of approx. 4.5 million in Europe.

Amazon Fire TV has been launched most recently in some European countries like Germany, Austria and UK end of 2015, so the installed base is insignificant.

Dataxis also believes that there is an untapped retail streaming devices market in Europe which is in its infancy right now.