Pay TV growth in Latin America at less than 1% quarterly 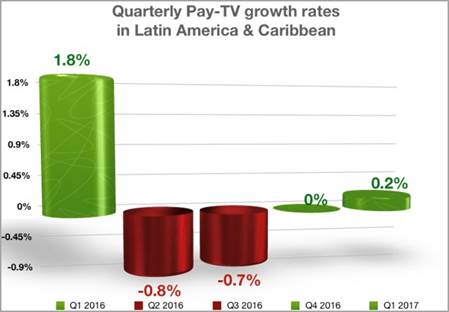 According to the recent quarterly update of Dataxis’ global database, Latin America and the Caribbean reached 72.6 million Pay TV legal subscribers for the first quarter of 2017. The figure shows a growth of 0.2% compared to the previous quarter and the region adds four consecutive quarters with growth rates below 1%.

DTH is the leading technology in Latin America with 50.4% of subscribers while cable TV systems account for 45.9%. Although IPTV has only 2.5% of subscribers, it is the technology with the highest year-on-year growth with 35%. All digital technologies have already reached 87.1% of Pay-TV households.

The three main Pay-TV groups account for 55% of Latin American subscribers. The ranking is led by America Móvil, followed by DirecTV (AT&T) and Televisa Group.