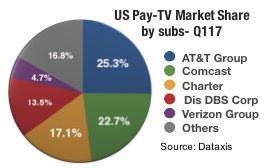 US Pay-TV market in the United States started 2017 with a slight decline. According to Dataxis, the total number of subscribers reached 100.3 million for the first quarter of 2017, which represent a fall of -0.61% (-612 000 subscribers) compared to Q4 2016. This trend of the market shows an erosion from several quarters.

According to Dataxis, US Pay-TV market is dominated by cable TV which represents more than half of the subscribers. DTH accounts for one third of the market whereas, IPTV represents 6% and linear OTT doubled its share compared to last year, reaching 2% of the market.

Dataxis underlines that the pay-TV market is led by AT&T Group (DirecTV USA, AT&T, DirecTV Now), with a 25% share. Comcast holds the second place with 23% of total subscribers and Charter completes the podium with 17% of the market share.