Although the economic recession waned somewhat in 2017, the Latin American pay TV sector was still affected. According to the eighth edition of the Latin America Pay TV Forecasts report, the number of pay TV subscribers was flat year-on-year.

Fewer than 5 million additional pay TV subscribers are expected between 2017 and 2023 – bringing the total to almost 76 million. Pay TV penetration will not climb beyond the current 44% of TV households. 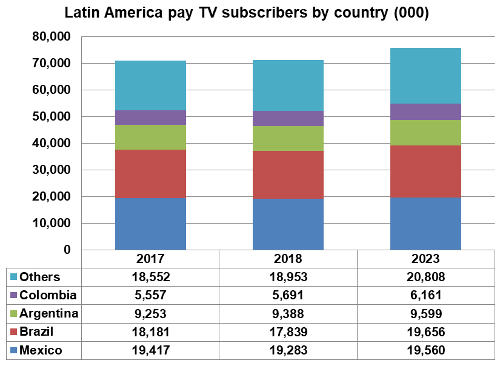 Simon Murray, Principal Analyst at Digital TV Research, said: “Given its continuing economic and social problems, Brazil lost 1 million pay TV subscribers between 2015 and 2017. Its peak year of 2014 will not be bettered until 2023.”

Murray continued: “Mexico recorded impressive growth in 2016, but its pay TV subscriber count fell in 2017. It will continue to decline until a slow recovery starts in 2020. The 2023 total will be just under the 2016 peak. However, it’s not all bad news as Claro and Telefonica will enter Argentina and Mexico, although this is likely to involve OTT.”
Mexico overtook Brazil in 2016 to become Latin America’s largest pay TV market, despite Brazil having twice as many TV households as Mexico. Brazil has been losing subscribers since November 2014. However, Brazil will regain top slot in 2023 – just.

Two operators dominate pay TV in Latin America. Claro/America Movil had 13.91 million pay TV subscribers (Down by 500,000 on the previous year) by end-2017 and DirecTV/Sky had 21.31 million. These two companies accounted for nearly half of the region’s pay TV subs by end-2017.