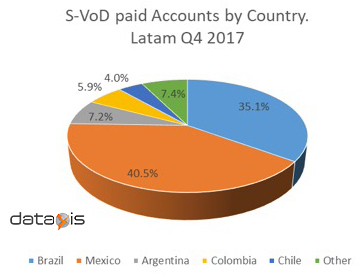 According to Dataxis latest research, as at 2017, Latin America reached 18.2 million of active paid account subscribed to a Video on Demand OTT service (S-VoD). This means an annual increase of 29.8%. Such volume is equal to 25.2% of the total fixed broadband accesses, which indicates it has more room to growth.

Netflix remains the leader of the market and increased its domain from 59% to 63% accounts. Besides, Netflix grew quicker than the overall market as it jumped 39% for the same period and Brazil represents its main market. Clarovideo, from América Móvil is positioned at the second place with almost 20% of the active paid accounts and Mexico is its main market.

Mexico remains the main market for the segment with 40.5% of the paid accounts, whereas, Brazil is the fastest growing market in Latin America and is at second place with 35.1% of the paying subscribers. Both market exhibits high levels of competition with 20 and 26 competitors respectively representing the presence, and surveillance, of vertical actors.