The dip in the overall market is due to slowing IPTV and SDV subscriber additions by service providers in some regions hit hard by the uncertain economic climate, particularly in North America, according to Infonetics’ report, IPTV and Switched Digital Video Equipment, Services, and Subscribers. 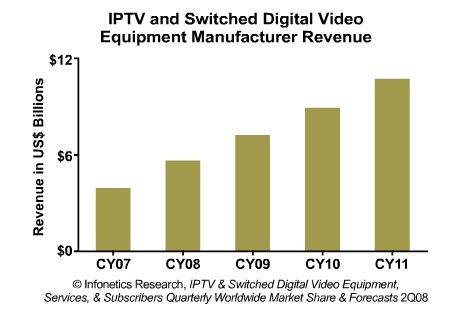 “In environments where the future of the economy is unknown, IPTV and SDV subscribers are more apt to stay with their current provider, rather than look for a new provider with whom they may have to invest in new equipment and other upfront fees; this is especially true in North America and Western Europe right now. However, service providers around the world–particularly in Asia, Europe, and Latin America–are still investing in IPTV equipment because offering video service is increasingly becoming a requirement to increase revenue per user. Operators will continue to add IPTV and SDV subscribers, just not at the fast clip they previously expected,” said Jeff Heynen, directing analyst for IPTV at Infonetics Research.