The North American SVOD sector is by far the most mature in the world, with 112 million SVOD subscribers to movie and TV episode platforms by end-2016. However, there is plenty of growth left in the sector. The SVOD total is forecast to climb to 171 million by 2022 – up by 59 million on 2016 or by 53%. 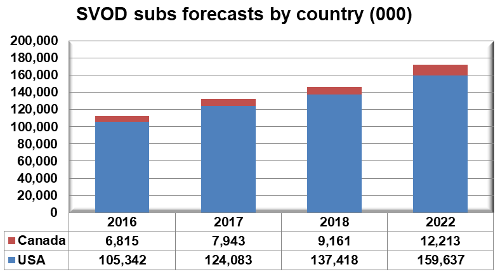 Simon Murray, Principal Analyst at Digital TV Research, said: “It is important to stress that these figures are gross – many homes take more than one SVOD platform, especially in the US. That explains why we forecast 132% SVOD penetration of US TV households by 2022.”