Last year, the media industry was strongly hit by the economic crisis following the outbreak of the pandemic. Revenues from TV advertising in Europe, which were already reaching a stagnation point in most advanced markets, decreased significantly due to advertisers retracting their campaigns and to reluctance in investing in marketing during lockdown measures and following the market recession. Meanwhile, digital advertising kept on steadily progressing, mostly led by Western European markets with the UK, Germany and France accounting for more than half of the continent’s search engines and social networks net advertising revenues. Digital advertising has been appealing to a growing number of advertisers since it creates opportunities for smaller budgets, often on a fully automatized ecosystem, for all sorts of ad formats. Ad expenditures in the digital environment already surpassed the amounts spent on traditional TV screens in some markets, for example in the Nordics where ads can’t be broadcasted on public networks and where audiences are used to pay for content and mostly consume video and TV through ad-free paying services. In developing markets, digital ad spend is also progressing much faster than on traditional broadcast TV. In Russia, digital ADEX has surpassed TV in 2018 and its proportion on total ad spend keeps on growing. 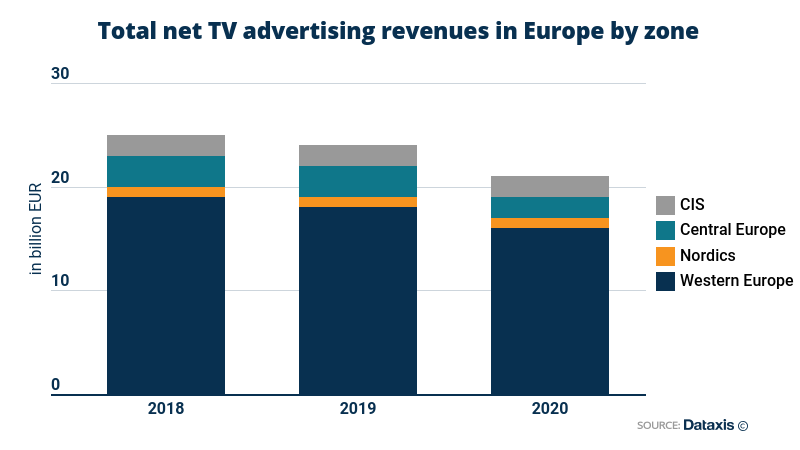 If TV advertising remains by far the most efficient medium in terms of brand image safety and viewers’ conversion into actual consumers, the industry seems to have reached a turning point with last year’s crisis. But with new capabilities brought onto TV screens by the deployment of IP based receptions and digital OTT services, the growing proportion of households equipped with connected screens and the integration of advanced features in traditional linear broadcast streams, new opportunities are flourishing for advanced advertising products bridging the gap between TV and digital. Senior executives discussed the most recent evolutions on advanced TV advertising offers and products in Europe during the first edition of the Nextv Ad Europe conference last month. 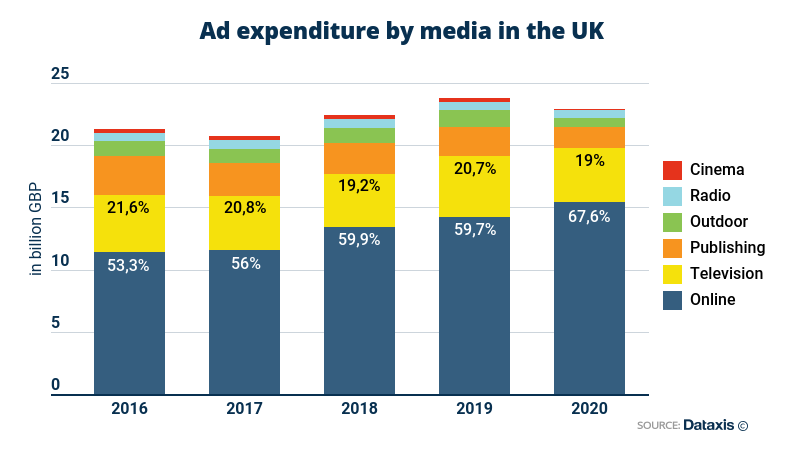 In the UK, a market where broadcasters generated 14.4% of total European net TV advertising revenues in 2020, advanced ad products were launched on TV screens as early as 2013 with Sky AdSmart addressable TV offer. Their advanced ad products have been attracting many new advertisers on British TV sets, including localized businesses that have been able to reach niche audiences with smaller budgets thanks to granular targeting capabilities. Sky collaborated with Liberty Global’s Virgin Media brand to include their pay TV customer base in AdSmart and thus scale up their footprint in the UK. AdSmart is now being deployed across Sky’s other Western European operating markets, while Liberty Global is launching their own addressable TV capabilities in the region. Their addressable advertising solution is already live in Belgium on Telenet’s platform. Other Western European pay TV operators are following suit. In France for example, a regulation has been passed in the summer 2020 to enable live targeted ad replacement on linear broadcast streams, and Orange and Bouygues Telecom started airing their first addressable ad campaigns on national TV networks at the beginning of 2021.

In other markets where free-to-air TV remains viewers’ preferred reception, broadcasters have started deploying advanced ad products with their own roadmap, outside of operators’ set-top-boxes parks. In Spain, around one fourth of TV sets are equipped with HbbTV standards, which can support advanced ad formats like interactive L shape banners, overlay ads and dynamic ad insertion in linear streams and catchup on-demand content. Atresmedia launched a commercial offer with HbbTV ad formats in early 2019. In Italy, an estimated 8 million households have a Smart TV, out of which Publitalia 80′, Mediaset Italy’s ad sales house, can address 7 with its advanced ad products. They have been working on HbbTV addressable ad formats for 3 years.

Opportunities for programmatic ad sales on the TV screen still generate a lot of questions, both for technical and commercial reasons, but TV industry’s actors are assessing their capabilities. In parallel AVOD pure players are coming with their digital ad sales operations on the TV screen and offering a new space for advertisers. Media agencies like Havas are bringing together programmatic DSP and traditional broadcasters. With digital TV and video platforms comes an unprecedented amount of data on viewers and their media consumption patterns that advertisers are craving for to better understand their audiences and refine their targeting strategy.

The TV landscape is moving towards digital and digital media are embracing opportunities to be on TV screens, creating new synergies in the industry. Advertising is one of the aspects that will be greatly impacted by this evolution. Executives and market experts will discuss local developments of addressable advertising offers in France, DACH markets and Spain in dedicated Nextv Ad conferences on November 23rd, 24th and 25th. Dataxis also just released data on advertising revenues by publishers across all media segments.