Covering 138 countries, the Global Satellite TV Forecasts report estimates that India will continue to lead the sector, with 66.9 million pay satellite TV subs in 2020, followed by the US with 34.1 million. Russia (18.5 million) and Brazil (15.3 million) will take third and fourth places respectively. These four countries will account for just over half the global total by 2020. 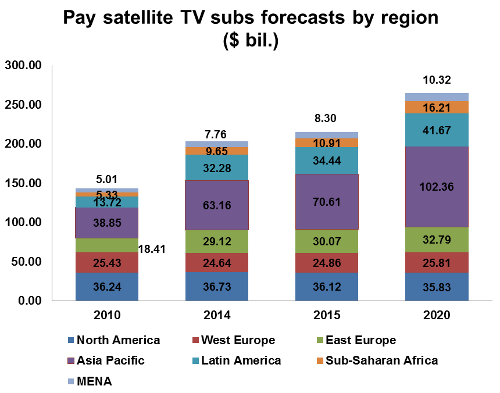 Asia Pacific and Sub-Saharan Africa will show strong satellite TV revenue growth. However, revenues will fall in Western Europe and North America. The US will remain satellite TV market leader by revenues, although its share of the global total will fall from 44.8% in 2014 ($39.6 billion) to 41.3% in 2020 ($39.2 billion). Brazil will be second in revenue terms by 2020 ($6.8 billion); having overtaken the UK in 2013.

India will add the most satellite TV revenues ($2.5 billion, moving from tenth to fifth place) between 2014 and 2020, with Nigeria increasing by $437 million and Indonesia $414 million. Revenues will more than double in 41 countries.
However, revenues will fall in Canada by $805 million, the US by $421 million and France $232 million. Revenues will fall or be flat in 38 countries. Much of this is due to greater competition forcing satellite TV platforms to offer cheaper packages which will lead to lower ARPUs. Furthermore, low-cost satellite TV packages are making a significant impact in several countries.