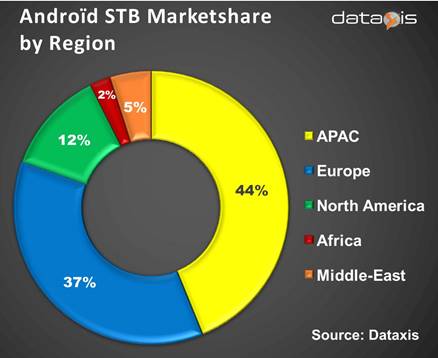 However, Dataxis research shows that the actual number of subscribers with Android STBs remains limited. For example, in Europe, for Q3 2017, less than 1% of Pay TV subscribers are using a Set-Top Box running with an Android OS.

Nevertheless, this is only the beginning of what Dataxis believes will become important. In fact, two-third of these operators started in 2017 and deployment have just started. Most recently, Rostelecom, the major Russian operator, announced a tender for the supply of 1 million Android STB. 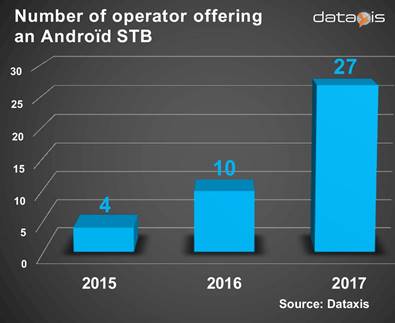 Finally, Android TV is not only growing in the pay TV environment but also at the retail market level and in Smart TV. At the retail level, many users have found ways to use Android STBs to access pirated content. According to the Federation Against Copyright Theft in UK, over one million of boxes running with an Android OS have been sold via the retail market over the past two years. With 25% of users admitting to access pirated content with it.

Smart TV sets vendors using Android TV are not yet the major players, with mostly Sony, Skyworth, TCL, Philips, Sharp amongst the well-known brands, while the two leaders Samsung and LG have their OS, but here also, Android TV is becoming significant.