According to the latest research from Informa Telecoms & Media, Asia Pacific is the world’s largest TV market and will pass the one billion TV sets mark this year. In addition, the region leads the way in terms of pay-TV subscribers with 394 million households taking pay-TV at the end of 2011. This is largely due the fact that it contains the world’s two biggest pay-TV subscriber markets – China and India.

However, despite its leading position in terms of subscribers, Asia Pacific’s pay-TV revenues continue to lag behind those of other regions. China and India only rank fourth and fifth respectively: To put this in context, despite having a combined subscriber base three times bigger than the US, the US generates more than five times the combined pay-TV revenue totals of China and India. Informa’s research shows that Asia Pacific generated US$33.5 billion in TV advertising revenues with a further US$33.1 billion coming from pay-TV revenues – making the regional TV market worth almost US$67 million.

According to Informa’s Media Research Manager Adam Thomas: “The low-ARPUs found in India, and particularly China, will continue to limit their revenue-generating capability for the foreseeable future. While their sheer size and potential, understandably, often make them the focus for TV executives, there are other markets in the region that are more successfully convincing their audiences to prioritize pay-TV expenditure.”

Informa’s new research has highlighted this issue by measuring the level of 2011 revenues generated within a country against its GDP. By this parameter, Malaysia is the regional pay-TV leader – putting it into Informa’s “high expenditure” category (see fig.). In 2011 Malaysia generated pay-TV revenues of just over US$1 billion – equivalent to 0.41% of GDP. This compares to just 0.06% of GDP generated by Indonesian pay-TV – the least productive of the 14 countries analyzed. China’s 0.12% ratio also places it near the bottom (and classified by Informa as a “low expenditure” market) although India’s 0.35% shows how much it has benefitted from the swift growth of its digital satellite services. 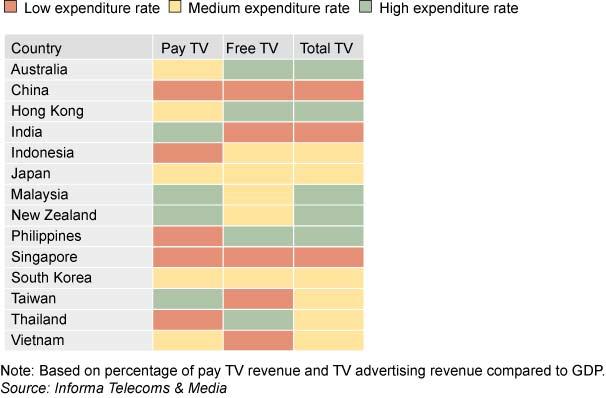 According to Thomas, “While socioeconomic issues are the major factors inhibiting greater ARPU growth in several countries, the fact that Malaysia is at the top of our league table highlights another key issue. The Malaysian pay-TV infrastructure is predominantly digital. This minimizes piracy and so boosts legitimate revenues. Much of the region still faces significant piracy and under-reporting problems and these will continue to limit market potential until they are seriously addressed.”