In a public consultation launched today, the Commission will get feedback on the current framework regulating Europe’s audiovisual media landscape (the so-called Audiovisual Media Services Directive – AVMSD), on issues like 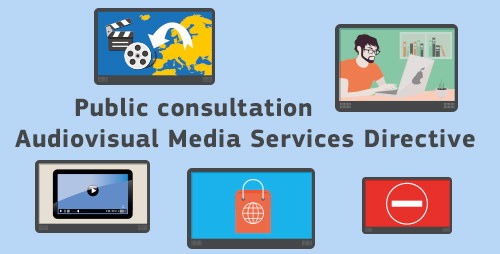 This consultation seeks concrete experience and feedback from stakeholders (market players, public organisations, consumer organisations) but also from viewers themselves, as users of audiovisual media services like TV channels and online services like Netflix, iTunes, YouTube, DailyMotion, HBO GO etc. The consultation, open until 30 September, is part of the Digital Single Market strategy, which foresees a review of this Directive in 2016.

This consultation is part of the assessment of the AVMSD under the new Regulatory Fitness (REFIT) strengthened evaluation process, under the recently adopted Commission’s Better Regulation Framework. It will assess factors including the added value of EU intervention in this domain and how effective the existing framework has been so far.

This is the first time respondents are offered a wider variety of options while giving their feedback to the consultation. Besides answering the consultation questions, they can now send their own ideas on how to improve legislation, provide their personal experience on how the AVMSD works, even create polls to ask other people’s views on their suggestion. Discover these options on our dedicated online platform.

Regulation in this field has a direct impact on citizens and businesses: we watch audiovisual content to get information or for entertainment every day; through this content we are exposed and interact with Europe’s creative minds and rich cultural diversity which convey sets of values but may also pose challenges to consumer rights. This is a vital sector of the EU economy with huge growth potential (relevant data in the Background).

The public consultation will seek views on the impact of the current Directive and on policy options for its future in, amongst others, the following areas:

The Directive has fostered unhindered cross-border transmission of audiovisual media services within Europe. At the end of 2013, about 23% of TV channels established in the EU targeted foreign markets (either EU or extra EU). However, much has changed since the Directive was adopted in 2007. Media convergence (the progressive merging of traditional broadcast services and the Internet) is now a reality. The traditional TV set is now only one of the means to watch audiovisual content as Connected TV, set-top boxes, but also PCs, laptops, tablets and smartphones are increasingly used. Globally, consumer internet video traffic will be 80 percent of all consumer Internet traffic in 2019. Internet advertising is also progressively outpacing TV. Video viewing is one of the earliest internet activities carried out by young children.

The public consultation will be available in all 24 official languages of the EU.

The importance and growth potential for audiovisual media services is huge:

This is not the first time the Commission is consulting on these issues. In 2013, the Commission published a Green Paper “Preparing for a Fully Converged Audiovisual World: Growth, Creation and Values” inviting stakeholders to share their views on the changing media landscape and its implications for the AVMSD.