IPTV will reach 60 million subscriptions in the EU by 2020

As broadband subscriptions continue to grow in the EU27, Point Topic has today announced analysis on how many subscribers there will be and how many will take an IPTV service as well. According to the leading global broadband analyst firm, IPTV is set to treble by 2020.

“We’re projecting just over 160 million broadband subscribers in the EU27 by 2020 and just over one in three will take an IPTV subscription,” says Oliver Johnson, CEO at Point Topic.

Johnson also adds that IPTV take-up in Europe has been very different in different countries. He says: “The success of IPTV depends primarily on two factors. Firstly is it available, not only the physical network but at a price the consumer can afford? Where the cost and the link are suitable there is demand for IPTV as we’ve seen in France. However in many markets not only are cost and availability significant barriers but the incumbent TV services are well entrenched.” 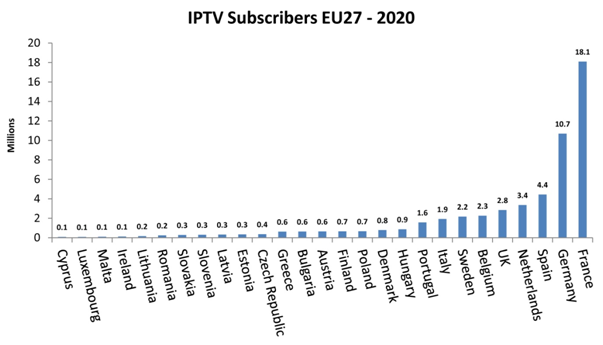 Many of the European markets, particularly in the East, have developed their own TV delivery systems over cable networks. Often small, local and sometimes non-profit organisations serve a particular community and while they do not have the same reach as the larger players they are proving to have a loyal subscriber base.

“Operators and ISPs are trying to tackle these barriers. Sometimes a broadband subscription will actually be priced higher than a service bundled with IPTV, a classic tactic to try and gain market share. They are all looking at consolidation too and we’d expect to see increasing buy-outs to try and gain audience share,” says Johnson.

He adds: “The success of IPTV in France compared to other countries in Europe and worldwide can’t be attributed to a single reason. A number of conditions exist which has made the diffusion of IPTV through the market much easier and quicker than in others, perhaps the main driver has been competition.

“France, with Free Internet as a good example, has much clearer and more transparent tariffs for IPTV and that has not only earned the consumers trust but allowed them to align the value they derive from the services with the amount they pay. It’s a simple equation but not the natural approach we’ve become used to from operators. Often the price isn’t obvious for each bundle constituent, and there are a number of reasons for this, but the end result is that the consumer resists purchase far more than they might if they felt they had better information.”

Point Topic has analysed over 2,000 standalone and bundled tariffs from around the world in 2011 and estimated how much extra ISPs generally charge to add IPTV to a subscription.

“We estimate* that a consumer will pay 66 US dollars per month on average today for a broadband plus IPTV service. If we split out the broadband charge we get revenues today of just over 5.3 billion dollars a year for IPTV services rising to 14.8 billion in 2020 in the EU27,” says Johnson.

Then there’s the matter of the over the top (OTT) suppliers.

“The entrance of Google and Apple in particular into the internet TV market could be a game changer. Along with services like Netflix, Hulu and offerings from other OTT suppliers, we could see a significant increase in competition and, hopefully for consumers, more clarity and lower prices,” concludes Johnson.

*Statistical analysis of 2,300 broadband and broadband + IPTV bundle tariffs from 83 countries from Q1 2011.