High Definition channels in Europe on the up

STRASBOURG — Recent data from the MAVISE TV database, developed by the European Audiovisual Observatory for the DG Communication of the European Commission, shows the current status of the European television market. MAVISE contains data on the EU markets plus the candidates Croatia, “the Former Yugoslav Republic of Macedonia” and Turkey.

In the context of national economic crises and competition from new modes of content delivery, the development of television channels in Europe remains stable. At the beginning of 2012, the MAVISE database contains information on a total of 8900 television channels. Of these, 7400 are established in the European Union, and 7900 in the EU and the candidate countries. A further 1000 channels are available in these countries but are broadcasting from third countries (including a large number of satellite channels from outside of Europe).

In 2011, 375 new television channels were launched in the European Union. Unlike in previous years where sport was the dominant genre of new channels, in 2011 the growth of HD channels had a major impact on the overall growth of the market.

High definition channels and their distribution

There are an estimated 20 3D channels broadcasting (or testing) in Europe, and they tend to provide a mix of content such as sport, films and special events. 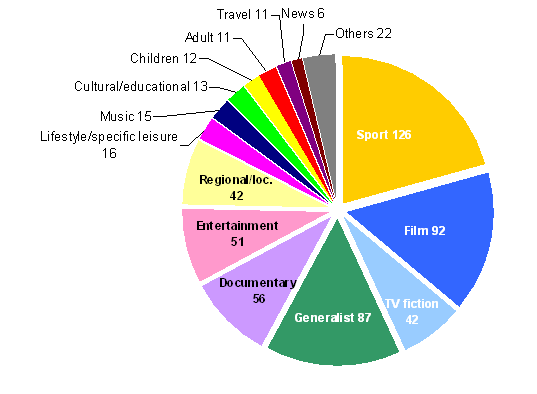 Growth in the number of platforms and operators

The growth of distribution platforms has also remained stable (see for example regarding the EU in the table below). The number of IPTV platforms and Pay DTT services continues to increase, while satellite packages and cable offers have declined since 2010. This is partly due to consolidation in these sectors. 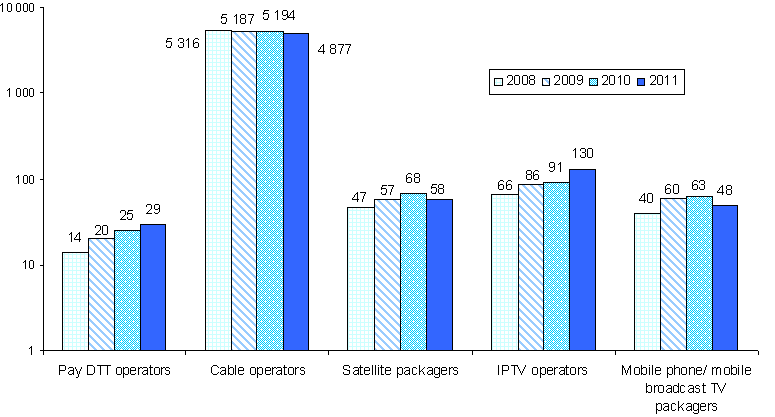 As we enter 2012, the EU deadline for switch-off of digital terrestrial television is fast approaching. In 2011, a further three EU member states completed the transition: Cyprus, France and Malta, bringing the EU total to 15. A further eight EU countries are expected to complete ASO (the United Kingdom, Greece, Ireland, Italy, Lithuania, Portugal, the Czech Republic and Slovakia) in 2012. Delays are expected in Bulgaria, Poland, Romania and possibly also Hungary. Switch-off has also taken place in non-EU countries such as Switzerland, Iceland, Croatia and Norway. 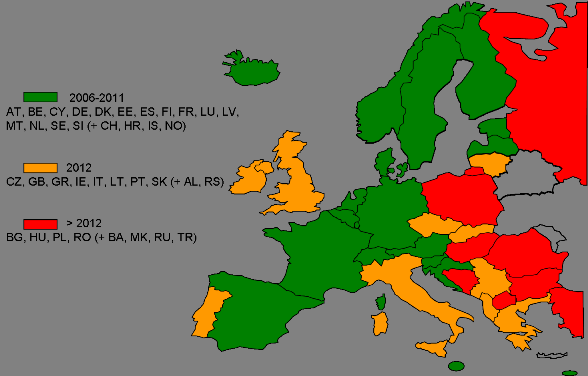 Digital terrestrial television services are quite advanced in several countries, with more than 60% of homes being DTT only in Italy and Spain at the end of 2011. In France and the United Kingdom, 62% and 74% of homes respectively, were using DTT in their homes (on primary or secondary sets).

At the end of 2011, 31 pay-TV platforms were available in 19 European countries. At the same time some planned Pay-DTT services in Spain and Portugal have not materialised, services have ceased elsewhere (Italy) and in several smaller countries the development of a financially successful model for pay DTT is proving difficult.