The information in the MAVISE database, created for the DG Communication of the European Commission by the European Audiovisual Observatory and the data collected by the Observatory in the 2010 edition of its Yearbook, show that:

According to data from the MAVISE database, at the end of 2010 there were approximately 414 HD channels available in EU, an increase from 274 at the end of 2009. This figure includes both HD specific channels and simulcasts of standard definition channels. A significant number of European public service broadcasters are also launching HD simulcast or HD specific channels. Sport remains the most important genre in HD television (approximately 20% of HD channels), followed by film, generalist and documentary channels. 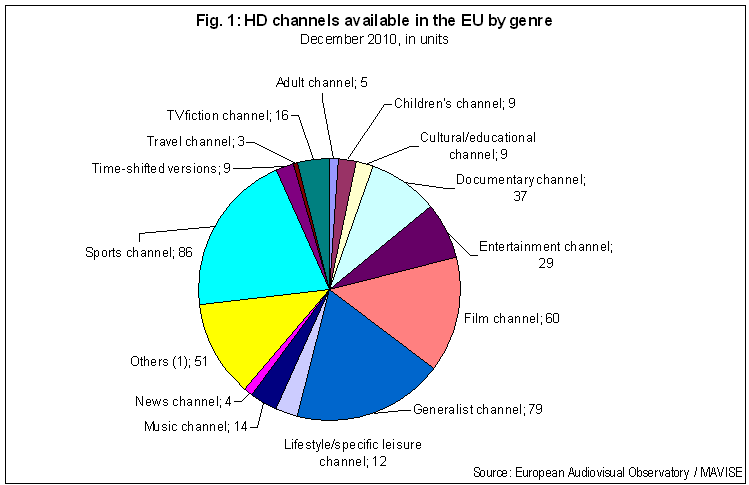 The distribution of HD television channels has also witnessed rapid development in the last year. At the end of 2010, two thirds of IPTV services offered HD channels and a third of IPTV services offered more than 10 HD channels. HD channels are now available on DTT networks in thirteen countries (as compared to three networks at the end of 2009). With the digitisation of cable networks progressing (35% digital in the EU at the end of 2009) more and more HD channels are appearing. The offers of the major cable operators include between 8 and 23 HD channels. Countries where satellite packages offer more than 20 HD channels include France, Italy, the Netherlands, Poland, Spain and the UK. In Hungary, Germany and Russia there are specific HD satellite platforms.

It remains to be seen how widespread the take-up of 3D television will be in European homes. Again sport and film will be the most important content driving this technology. 3D channels are being tested and launched on a range of satellite platforms including Sky (in the UK, Italy and Germany), Viasat, Canal+ (France and Spain), Meo (Portugal) and NTV (Russia). In the UK, the Sky 3D service claimed to have 70,000 subscribers at the beginning of 2011.

More than 300 European television channels were launched in the course of 2010 in the European Union. As in 2009, the genre with by far the highest number of new channels was sport, with 47. These were followed by pornographic channels (32), entertainment channels (26), HD simulcasts of existing channels (25), documentary channels (19) and lifestyle channels (16). EU-based channels launched in 2010 include 22 new public service channels, such as the mini-generalist RAI 5 in Italy and the special-interest channel TVP Seriale in Poland. Most of the new public service channels were HD versions of existing ones (France 3 HD, RTBF 1, 2 and 3 HD, numerous channels in the autonomous regions of Spain and ITV regional windows in the United Kingdom).

Over the same period, a total of 118 channels were closed down in 2010. Apart from regional and local channels, the most common types of channels in the European Union which ceased transmissions in 2010 were entertainment channels (16), pornographic channels (11) and home shopping channels (9). Those that disappeared in 2010 include channels as varied as the public service channels cultural.es (Spanish cultural channel) and RTBF Sat (Belgian international channel), Italian music channels MTV brand new and MTV Pulse, the British travel-based home shopping channel Thomas Cook TV and the news and discussion channel Het Gesprek in the Netherlands.

9,800 European channels, including 7 600 channels established in the European Union

At the end of 2010, there were 9,893 television channels in the European Audiovisual Observatory’s 36 member states (7,622 in the EU). Of the 9,893 European channels 60.2% are regional or local channels and 39.8% are national and international channels, a relatively stable figure compared to the previous year. 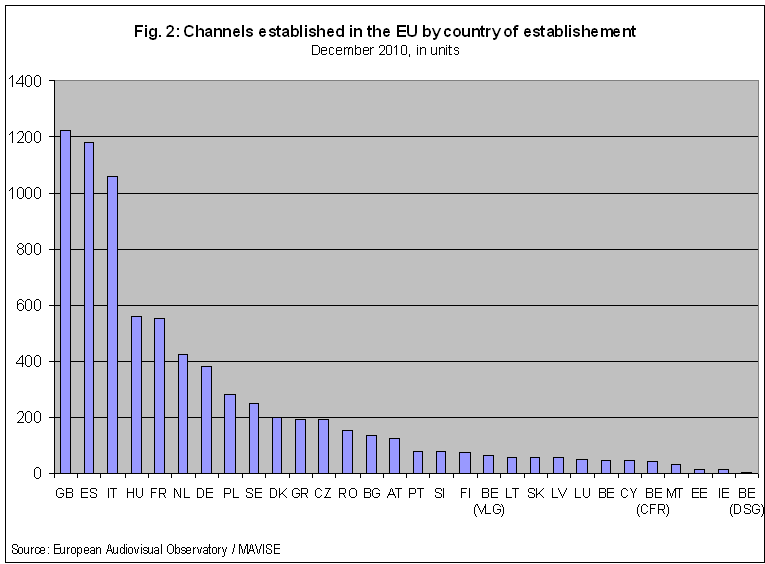 If one considers the geographic origin of European channels, it is the United Kingdom that leads with 1,222 channels established there at the end of 2010. Almost half of the channels established in the UK (588) are broadcasting to other European countries, and this includes the many linguistic versions of channels such as Disney Cinemagic, Viasat Explorer etc. Following the United Kingdom are Spain (1,180), Italy (1,059), Hungary (558), France (550) and the Netherlands (421). Regional and local channels are particularly numerous in most of these countries, in contrast to the United Kingdom. The concentration of the establishment of channels in the European Union in certain countries is considerable since five countries account for almost two thirds of all channels

However, these figures relate to the establishment of channels and not to their availability. For example 16 channels, including only 10 national channels, are established in Ireland but there are more than 500 channels available on Irish television screens.

Half of European television households are now digital

By the end of 2009, 56.1% of European homes (36 members States of the European Audiovisual Observatory) were digital, compared to 45.3% a year earlier. This figure rises to 71.5% if only European Union households are taken into account.

The roll-out of digital terrestrial television, the digitisation of the traditional distribution platforms such as cable and satellite, and also the increasing take-up of IPTV in several European countries, are the driving forces of this digitisation. Graph 3 below details the growth in the number of platforms in Europe between the end of 2008 and the end of 2010. Cable operators are by far the most numerous, although their number is remaining fairly steady, as, interestingly, did the number of IPTV and mobile television distributors in 2010. In contrast, pay-DTT and satellite operators are increasing in number. 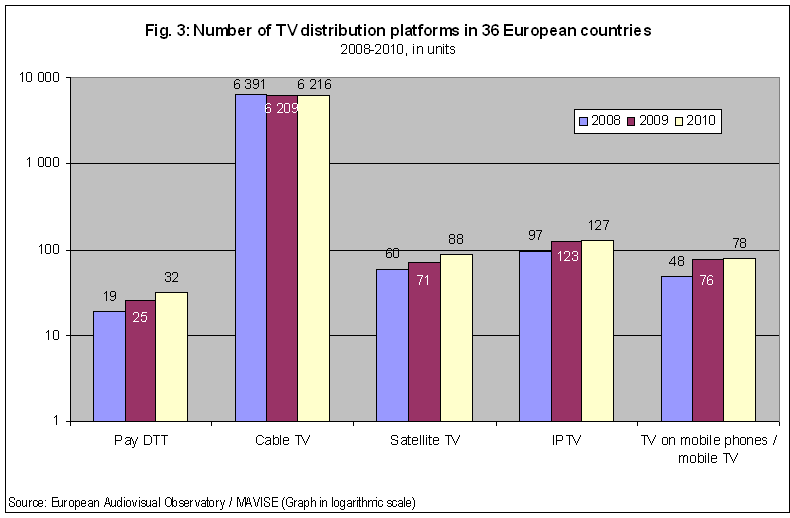